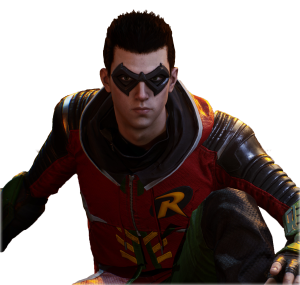 One of four playable characters in Gotham Knights, Robin’s strengths are his stealthiness and his tech skills.

This tree significantly increases Robin’s damage — especially when attacking enemies from behind — and also contains improvements to his decoy that allow it to reflect damage and/or explode.

This tree, which syngergizes with the Slugger tree, boosts Robin’s elemental damage, and improves his ranged attacks, modifying them to work like a temporary mine when they hit surfaces.

Robin’s Knighthood tree further improves and encourages the use of his takedowns, granting him buffs for sucessful ones. It also gives him a tool to reenter stealth after attacking from above, improves his microbots ability, and makes his combos stronger. Robin’s Heroic Traversal Slideways (teleportation) also unlocks when this tree becomes available.

Robin’s Momentum abilities focus on evasion and confusion, with his decoy distracting enemies and allowing him to attack them from behind. He can also keep himself safe by deflecting projectiles. His Ultimate Ability, microbots, synergizes with the elemental damage buffs in his skill trees.