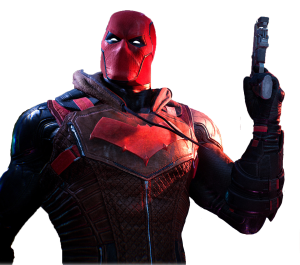 One of four playable characters in Gotham Knights, Red Hood’s strengths are his grappling abilities and dishing out serious damage from afar.

This tree focuses on ranged damage output per second, speeding up your attacks, boosting your critical attacks, or rewarding longer aim time with increased damage.

This tree boosts Red Hood’s melee capabilities, with a particular emphasis on grappling. This skills below improve his grab ability as well as their damage.

A strictly DPS tree, with some skills focused on doing damage to a specific type of enemy. Notably, Combined Fire lets Red Hood do more damage when aiming at the same foe as an ally.

Red Hood’s Knighthood tree adds some crowd-control to his kit, causing both his grabs and his knock-out ranged attacks to inflict Fear in nearby enemies. It also adds some oomph to his headshots and weak spot targeting, and improves his ranged attack combo and his Ultimate Momentum Ability. With this tree comes the Heroic Traversal Mystical Leap, which allow Red Hood to use Spirit Platforms to leap through the air.

Red Hood’s Momentum abilities generally strengthen his ranged attacks, with faster reloads, high damage abilities, and even a Portable Turret. However, he can also unlock the Mystical Punch and Mega Tackle, improving his melee combat. His ultimate ability, Mystical Rounds, locks onto enemies and deals serious damage to everything in his line of sight.