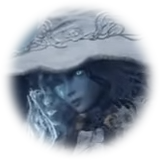 This mysterious NPC gives you a gift when first you meet, and later offers an alternative to following the path the Two Fingers have set you upon. Following her quest unlocks one of the game’s alternative endings.

Ranni the Witch’s long questline unlocks one of the game’s alternate endings the Age of Stars (although you aren’t locked into it by doing her quest). Completing her quest is also the only way to get the

The first time you encounter Ranni is at the Church of Elleh in Limgrave. She only appears at night, and only after you’ve already received the

Spectral Steed Whistle from Melina. Here you can find her on the northern wall of the church — speaking with her will earn you the

Spirit Calling Bell and the

If for some reason you cannot get Ranni to show up at the Church, you should be able to purchase the Spirit Calling Bell from the Twin Maiden Husks in Roundtable Hold.

You’ll need to go through Caria Manor and defeat Royal Knight Loretta in order to complete the next step, as beyond Loretta is the Three Sisters area. There, make your way to the top of Ranni’s Rise and speak with her. (Again, if she isn’t present, try returning at night). Speak with her until she asks you to join her – if you agree to help her, you’ll be trapped in the tower until you go to the bottom floor and speak with all three NPCs there. Then go back up the tower and speak once more with Ranni, exhausting her dialog.

If you have been following Rogier’s questline, Ranni will not ask you to help her, instead saying that she doesn’t have the curse mark you’re looking for. If this occurs, return to Rogier in Roundtable and speak with him – he’ll suggest you join her, you’ll be able to go back, speak with her again, and join her quest. If you’ve started the Festival of Radahn, but haven’t yet completed it, Ranni will not appear in the tower – you need to defeat Radahn before you can find her in her tower.

Note that steps 3-5 seem to be optional, although it’s best to do all the steps just to ensure the quest doesn’t break (and to get all the dialog!).

Find Blaidd in Siofra River. He’ll tell you to speak to Seluvis (who is in the southernmost tower of the Three Sisters).

Speak with Seluvis, who can be found in the tower southeast of Ranni’s Rise in Liurnia. He’ll give you

Seluvis’s Introduction and send you to Sellen.

Now you’ll need to find Sorceress Sellen, who hides in the cellar of the Waypoint Ruins in Limgrave, guarded by the Mad Pumpkin Head boss. Show Sellen the letter of introduction, and she will tell you that you’ll need to defeat Radahn to access Nokron.

Go to Redmane Castle in the southeast of Caelid and defeat Starscourge Radahn.

Teleport to the Fort Haight site of grace in Limgrave, and head west to find a newly-created crater. Make your way into it to find Nokron, the Eternal City. At the end of this area, you’ll be able to collect the

Fingerslayer Blade. Note that you don’t need to explore the Ancestral Woods or the Siofra Aqueduct to complete Ranni’s quest.

Warning: Giving Ranni the Fingerslayer Blade will kill Seluvis – if you want to complete his questline, do so before continuing with Ranni’s.

Return to Ranni’s Rise with the

Fingerslayer Blade — she’ll take it and give you the

Go to the Carian Study Hall in Liurnia and walk up to the table in the first room – you’ll be given a prompt to place the statue. Do so and the tower will invert; you’ll need to make your way through the tower to the elevator, which will take you down to the top of the study hall tower. Then cross the bridge (killing the Godskin Noble here if you like) and enter the divine tower – at the top you’ll find Ranni’s corpse, from which you can retrieve the

Cursemark of Death (and the

Stargazer’s Heirloom as a bonus).

Renna’s Rise – the eastern tower in the Three Sisters – will now be open. Go to the top and enter the waygate there to travel to Ainsel River (Main).

After teleporting to Ainsel River (Main) via the waygate in Renna’s Rise, rest at the nearby Ainsel River Main site of grace and find the “Talk to miniature Ranni” menu option. Use it three times and Ranni will speak from the doll, tasking you with defeating the Baleful Shadow. You’ll need to continue through this area and follow the river through Nokstella to reach an elevator — this will take you down to the Nokstella Waterfall Basin site of grace, and from there you can go through the nearby tunnel to find the Baleful Shadow. Continue to the next elevator and grab the Lake of Rot Shoreside site of grace.

Note that if you’re just trying to complete Ranni’s quest, you don’t need to explore Nokstella, and can instead skip it and follow the river to the elevator.

Teleport back to the Lake of Rot Shoreside and make your way across the Lake of Rot, then down into the Grand Cloister. Get in the coffin where the river turns into a waterfall to be transported to the fog gate for the Astel, Naturalborn of the Void boss fight.

Defeating Astel will allow you to continue to the Moonlight Altar via the nearby elevator. You can ignore the dragon outside the Cathedral of Manus Celes if you want – inside the cathedral, go through the hole in the floor south of the site of grace to find Ranni. Interact with her to place the ring on her finger – you’ve done it! She’ll say thanks and vanish, leaving you the

Once you defeat the Elden Beast, you’ll find yourself in front of Fractured Marika. Nearby on the ground is a blue summon sign — use it to summon Ranni and achieve the “Age of Stars” ending!