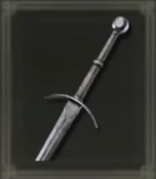 In Elden Ring, you will find many different weapons that will be better or worse suited for certain situations. Many weapons will have different animations and attack types, and some will be better suited to staggering foes, while others will have damage types that will be more effective against certain enemies. Each weapon comes with different animations for one-handed and two-handed attacks, as well as sprinting attacks, attacks after a roll, jumping attacks, and guard counters.

Contrary to previous games like Dark Souls, weapons have attack chains and some additional ways of inflicting damage on your enemies:

Additionally, every weapon comes with an equipped Weapon Skill, which is a special skill that uses FP to either deal damage or enhance you for a time.

Every weapon comes with a weapon skill, which can be used for an FP cost specific to the skill. One thing to note is that weapons and shields both have associates weapon skills, but use the same input to activate those. If you’re holding a shield in your offhand, it will use the shield’s skill first, and you will need to hold your weapon with both hands to use its skill instead.

While every weapon comes equipped with a Weapon Skill, these can also be changed by interacting with a Site of Lost Grace, and using the Ashes of War menu.

These ashes can be found throughout the game, and will allow you to modify your weapon’s Weapon Skill, as well as its damage types and attribute scaling.

However there are a few restrictions:

Ashes of War come with their own attribute scaling types, as well as the skill associated to them, and some of them will modify weapon stats with additional elemental damage.

Weapons in Elden Ring are all very different and it can be hard to pick the one that suits you best. Luckily, every weapon has different stats, which will allow you to prepare for different encounters and ensure that you are well equipped. To explain these stats, we’ll be using the Battle Axe as an example.