Anyone who has spent more than a few minutes in combat in Cyberpunk 2077 has asked asked themselves at one point “Why am I on fire?” In this guide, we’ll explain why you’re overheating, and what you can do to combat it.

Why Am I on Fire?

You’re on fire because an enemy netrunner is hacking you, choom. It’s easy to tell when it starts happening — you’ve probably already noticed the big OVERHEAT warning that pops up in the middle of your screen when you’re being hacked. When you get that warning, go into analysis mode (your scanner) and look for the yellow dotted lines. Those lines point to the netrunner that’s hacking you. 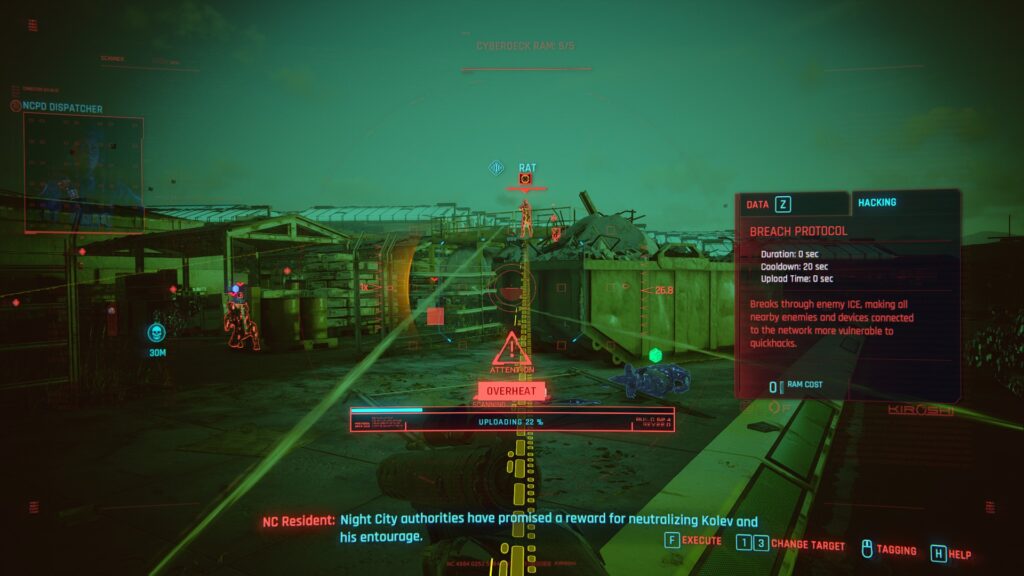 Sometimes, you’ll see that the line bounces off of something (it tends to be a surveillance camera). You’ll have to follow the line through it’s bounces, of which there can be multiple, until you find where they end. You can see an example of this below.

How to Stop Overheating

The easiest solution to an enemy netrunner hacking you is to simply kill the netrunner. By using your scanner to figure out where they are, you can usually take them out before they can overheat you.

There is also a perk in the Quickhack tree, I Spy, that reveals any enemy netrunner that attempts to quickhack you. It only requires 5 technical ability, so if you’re struggling to locate enemy netrunners, it’s worth considering picking up the perk.

Use Cyberware or Clothing

Another way to deal with enemy netrunner hacks is to invest in some Frontal Cortex cyberware:

For more detailed information on cyberware, and how it can help vs enemy hacking, check out our cyberware guide.

There is also clothing that can provide defense against Burn damage, so make sure you’re checking your inventory from time to time to see if you’ve picked up anything that might help. For other ways to defend against Burn and other damage types, you can take a look at our Combat Guide which covers the topic in more detail.

Invest in Attributes and Perks

That’s about all you need to know about overheating in Cyberpunk 2077. Let us know in the comments if you have any questions, or if we missed anything!

Unabashed FromSoftware fanboy still learning to take his time with games (and everything else, really). The time he doesn't spend on games is spent on music, books, or occasionally going outside.
Subscribe
1 Comment
Most Voted
Newest Oldest
Inline Feedbacks
View all comments

This looks to be a really effective guide. I am also having some overheating issues while playing cyberpunk 2077. I hope this guide will lead me to get rid of this problem