You might hear this district referred to as “the biggest bedroom in Night City.” Rightfully so – most of the Night City lives here, including corporations and the government sector. For the regular folk Heywood is pretty much the last option before Pacifica or the industrial wasteland of the Badlands.

What is the Heywood District?

Heywood seems to have a little bit of everything, both power and poverty.

In the north of the district, near the City Center,you can find the lush parks and towering skyscrapers. The richer parts are primarily occupied by corpos, although every now and then an odd soul scores an apartment in this region. Wellsprings is considered to be the safest part of Heywood, populated by manual workers and underpaid corporate employees (pretty much your run-of-the-mill American urban setting of 2077).

Once Night City got overtaken by corporations, the government relocated to Glen, making it a state-owned subdistrict of Heywood complete with a town hall, a mayor’s office, and a court. For what it’s worth, a large Night City Police Department station is now located here as well.

Further south, however, the views change drastically. Modern skyscrapers are replaced by dangerous slums, unfriendly to outsiders. Vista Del Rey, the poorest part of Heywood, is crucially underdeveloped, ridden with crime, and getting only more chaotic every day with common residents moving out and gang members moving into the vacant space.

Still, Heywood isn’t all that bad. Some feel lucky they found an apartment in this area, over being stuck in Pacifica or the Badlands. Even with such powerful gangs as Valentinos and the 6th Street Gang (you might know them from Santo Domingo) roaming the streets and causing conflict, the area is relatively nice.
That is, if you know your place and keep your head low. 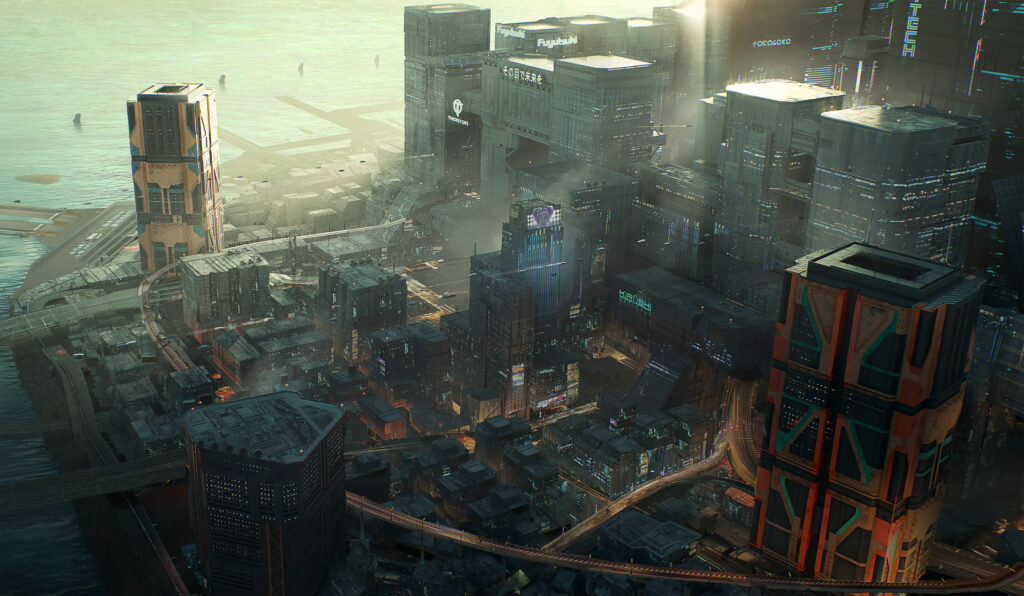 If you picked the Street Kid Life Path for your character, your journey will begin in a Heywood’s bar, El Coyote Coho.

In exchange for a favor, V’s friend Pepe will ask them to pay a visit to the local Fixer and settle Pepe’s debt for him. The Fixer, in turn, will involve V in a robbery to cover the debt. V will be tasked with stealing a car (Reyfield’s Aerondight S9) that belongs to an Arasaka corpo. V hitches a ride with an old friend Padre (also a prominent figure in the area) on their way to Westbrook and witnesses a brief confrontation with a 6th Street Gang member.

V’s quick job with the car (fairly easy, since they were given the key), is interrupted by Jackie Welles (here he appeared as Padre’s driver), who decided to intercept the car V talked about with Padre and make some profit for himself. Both are found on the spot and arrested by NCPD and their Inspector Stints. Stints recognizes both Jackie and V. Arriving to the scene, Kaoru Fujioka — the owner of the car — suggests that the criminals are dumped into the river. Instead, the officers knock the two out and leave them in the alley. 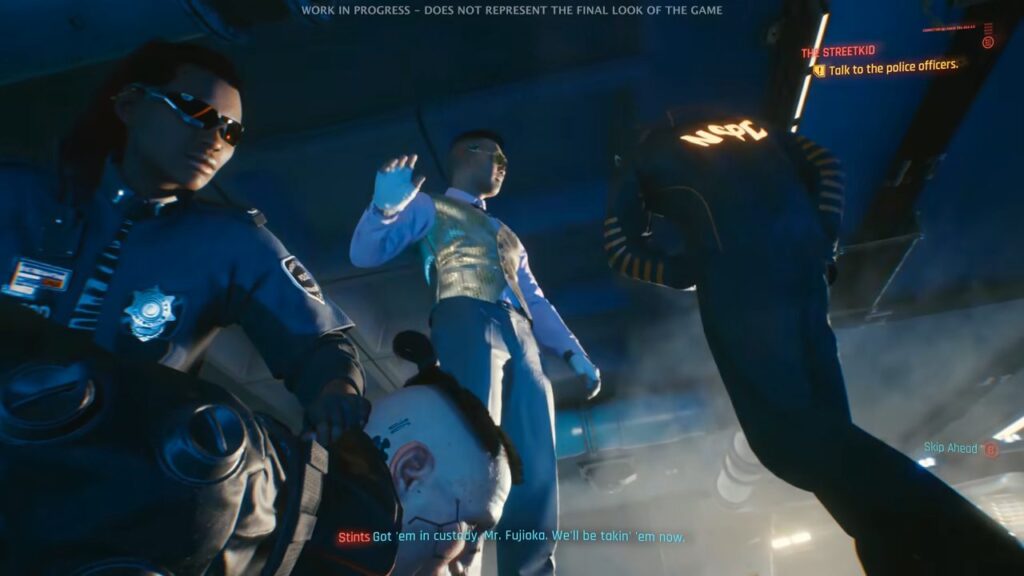 After this shared experience V and Jackie bond, the quest completes, and the main questline begins with Breaking Through. 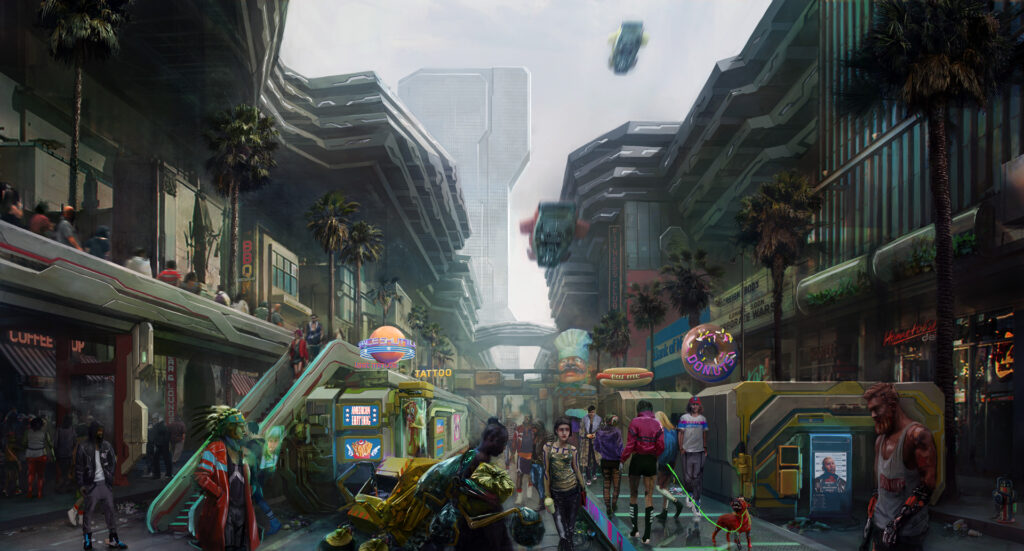 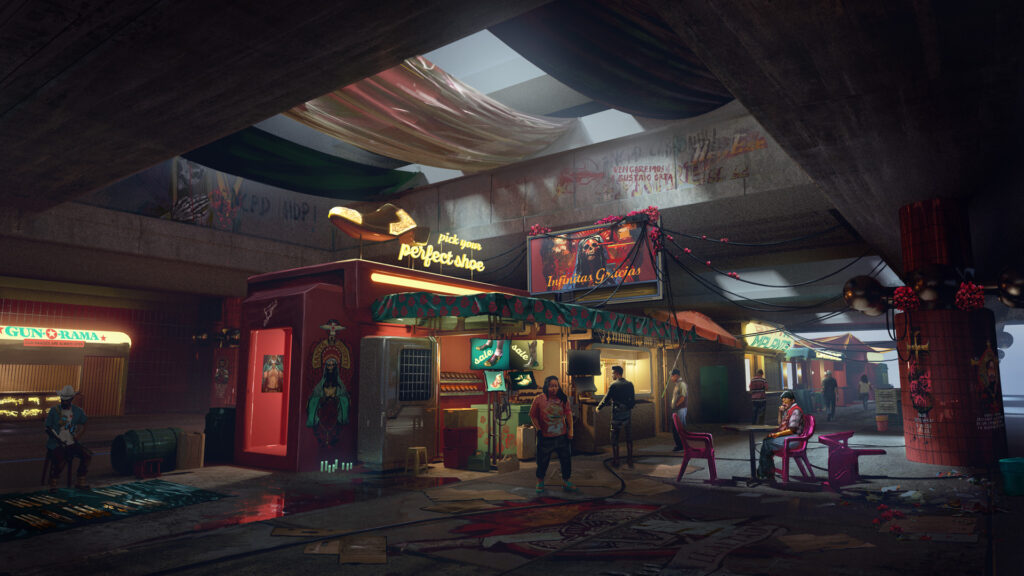 One of Night City’s largest gangs. Yet, what makes them special is their strong moral code built on their century-old traditions. Values of honor, justice, and brotherhood (at least, in their own interpretation) are of deadly importance to their members. They control predominantly Latino areas of Heywood and keep corpos, police, and other gangs out with the help of local community.

You can read more about Valentinos in our Valentinos: Cyberpunk 2077 Gang guide!

6th Street has some presence in the Glen and they recently had some conflicts break out with the Valentinos.