Some people got to test out some Cyberpunk 2077 weapons personally, and that’s quite great because CD Projekt Red is letting people outside of their development team in as a part of their inspiring confidence in the game. Well, whether they were prepared for it or not, they are also getting some detailed feedback from the community.

They got to hear some celebratory words of praise from people who tried out the combat system, from people who watched people who tried out the combat system, and from weapon hobbyists who studied every frame in all available footage of the game. However, they got back some serious criticism as well, and nothing riles up the passionate community like words of concern about an ambitious upcoming game.

Issues of non-intuitive controls, poor impact feedback, laggy physical movement animations, and unimpressive weapon power have been pointed out about both melee and ranged combat and the fans are eager to see these elements improved in a much-anticipated action-RPG game of 2020.

So, looking at what we know from the Night City Wire: Episode 2 and interviews that followed right after, what has CD Projekt Red done? 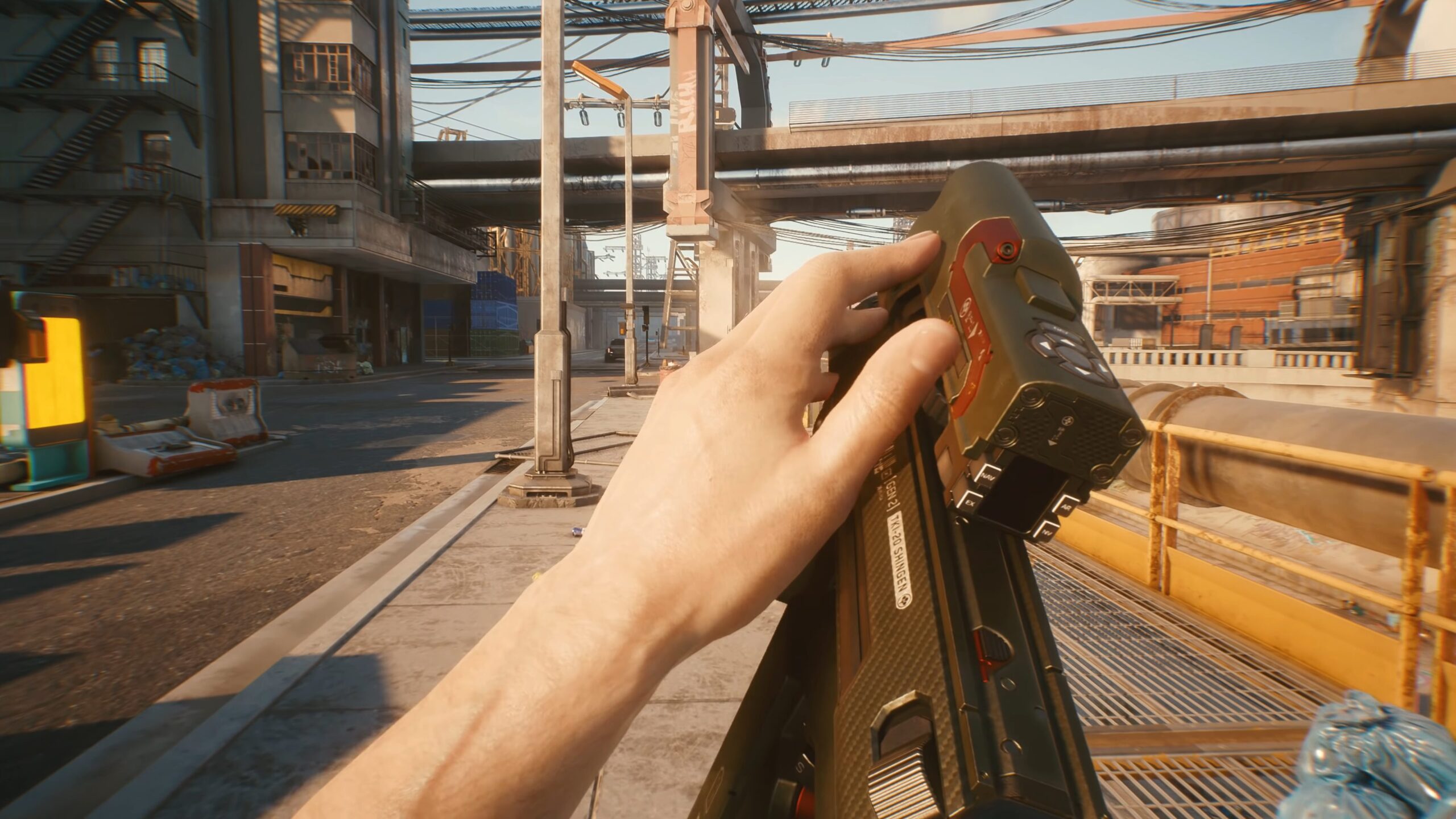 Cyberpunk 2077 Is Still in Development

Let’s step into this discussion with an important consideration in mind: Cyberpunk 2077 is technically still in development until its release date in November and we don’t know at what stage of development their demo was put up or their footage demonstrations were recorded. We don’t know what community feedback they actually took into consideration and how they plan to address it.

In combining FPP combat and RPG elements it’s doubtful that they will be able to satisfy the individual and complex worlds lying on both sides of the two video gaming genres. This job might have to be taken over by future patches, DLCs, or even community-made mods.

We simply don’t know enough and can’t expect too much right now.

However, the fact that Cyberpunk 2077 is still in development gives us an opportunity to join CDPR’s community backseat to observe how they implement those changes that they discuss publicly. Moreover, it gives us a chance to participate in this process (check out this interesting topic on CDPR forums, for example!), however many loud voices might be surrounding us in that regard.

What Has CD Projekt Red Done About Combat in Cyberpunk 2077?

Weapon Experience Is Meant To Be Upgraded

Well, above all, CDPR improved the direction of communication with their fans. This actually might be the biggest and most beneficial change going forward.

What do we mean by that? Well, with the second episode of Night City Wire series CD Projekt Red finally began to talk about Cyberpunk 2077 as an RPG game with FPS weapons, as we have mentioned in the section above. A lot of explanations about the intended upgrade system rolled in to explain the perceived weapon deficiencies.

Those who got a chance to play a bit of the game really only experienced its very beginning, not even past the first main quest mission. Per the intended system of skill upgrade these players have started without any remarkable proficiency in any of the weapon categories. The accuracy, range of impact, reload time, and general feedback from their weapons was lowered to represent that.

So, we could see significant changes in how combat feels further into the game. Could this part of the game still be frustrating enough to make it unenjoyable? Definitely. Still, it’s great to see that CDPR is aware of the concern and is giving it due attention.

Here is one thing that might have come from Night City Wire’s episode that was not mentioned but could very much be perceived: the satisfying animation and effects. Loud snaps, bouncing bullets, flashes of explosion, and the spectacular show of slicing and dismembering done by blade weapons.

It’s a chaotic montage overall, but what we saw of ranged combat has improved since the original 48-Minute Walkthrough from 2018. We are yet to see these weapons perform within a cohesive quest, but the visual impact of bullets, clean gun and blade animation, quick motion execution, and the variety of special damage types and stunts have given the game’s weapons some personality. 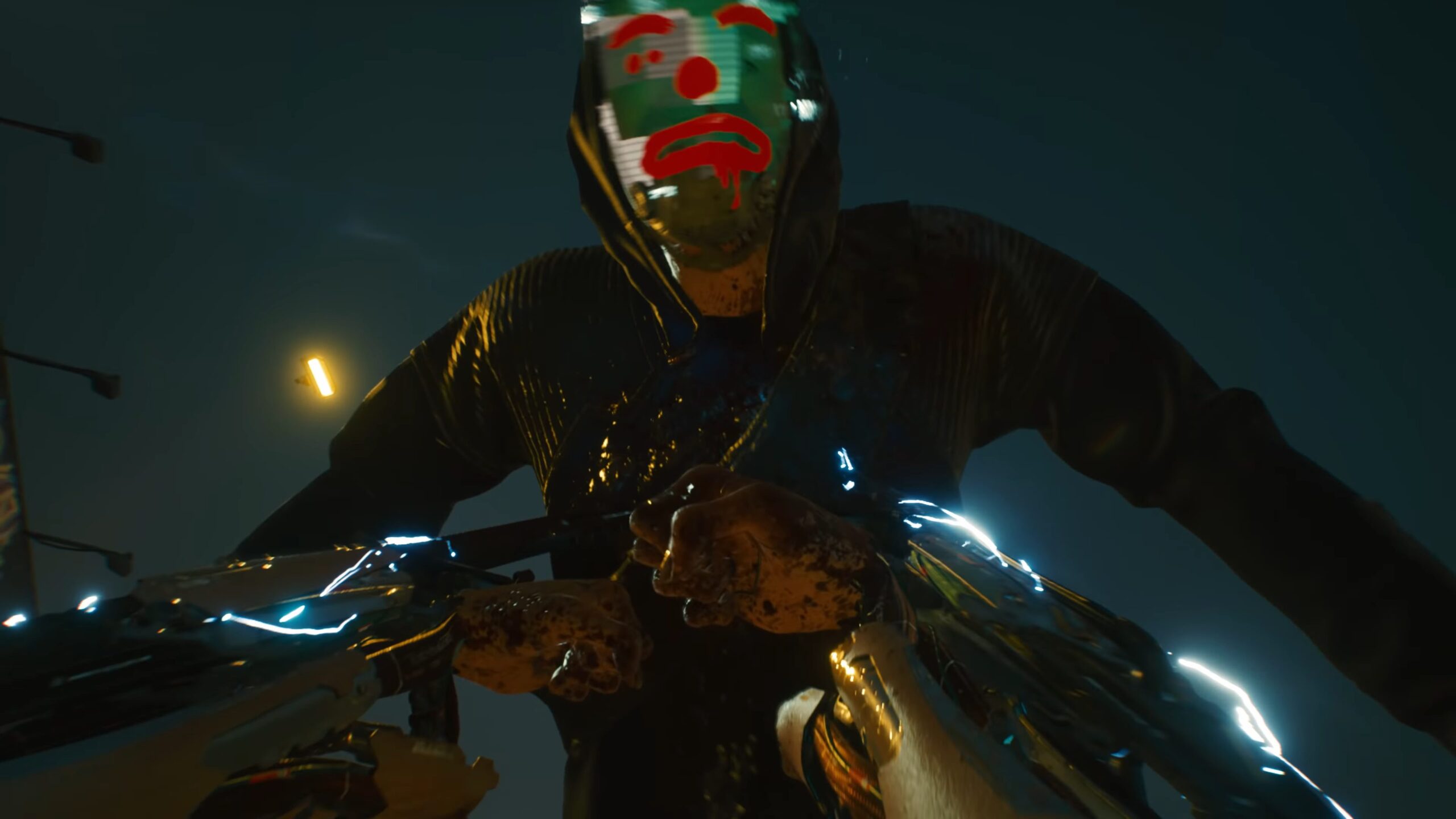 As a part of futuristic sci-fi combat, these weapons now have something quite satisfying to offer us. The issue of controls and responsiveness is hard to judge from mere visual show, but the way in which CDPR’s team began to discuss leveling of gun recoil and spread to make ranged weapons feel like they can be learned by a skilled player gives a lot of hope in that regard (check out this recent interview with Pawel Kapala to see what we are talking about).

No Enemies as Bullet Sponges

RPGs are famous for their bullet sponge enemies and boss challenges. RPG leveling systems have often been coupled with the speed within which an enemy with god-like powers can be taken down. For that reason (also, for the inability to give FPP combat some proper depth), games like Cyberpunk 2077 tended to have disappointing combat controls and mechanics.

However, the combat system might make you feel both on edge and rewarded for your strategy just yet: CD Projekt Red took seriously to this concern.

Enemies in the game will not be hard to kill at all with a higher-level weapon. That is, a weapon that can penetrate the cover and thick layers of cyberarmor. It’s more of an issue of surviving the encounter as well — just like an enemy can be taken out with a couple skilled bullet shots, so can be the player. You will have to include defensive tactics into your strategy before you can neutralize entire rooms packed with enemies. 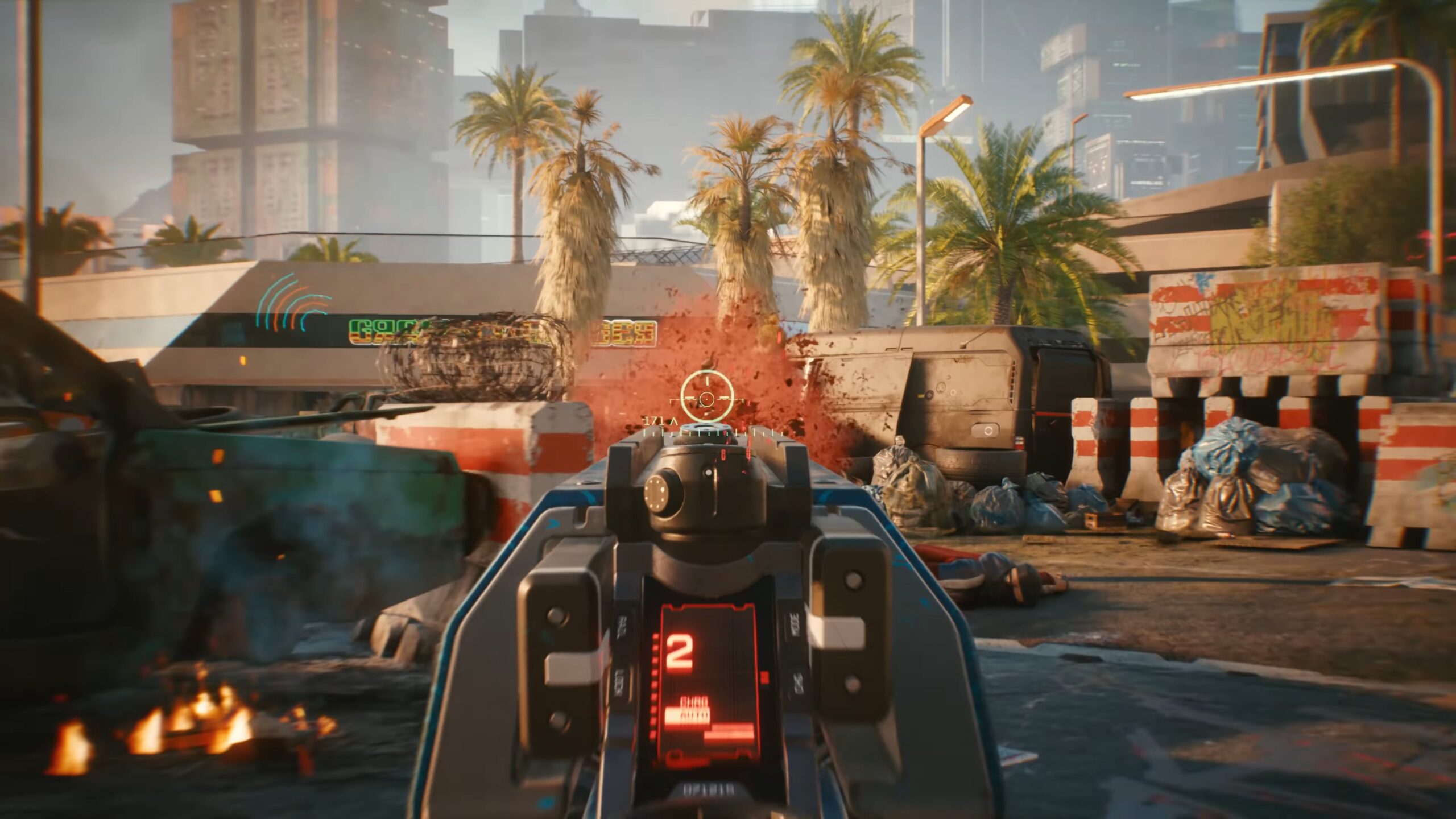 But what about the heavily equipped, armored enemies? Well, one of the ways CD Projekt Red is addressing the issue of repetitive assault is feedback from hits. For example, a massive enemy will still stumble or even fall from gunfire, which could figure into your strategy. While they haven’t exactly told us how, the developers have addressed the bullet-sponge aspect of such battles as well.

We will just have to see for ourselves.

Have All Concerns with Combat Been Addressed Sufficiently?

Herein lies the issue with us learning about Cyberpunk 2077 through a thin straw of public communications. We really have no idea how the later gameplay and the upgraded levels will feel like, we don’t quite know how CD Projekt Red is interpreting and solving the issues they chose to work on, and we don’t know how much of their limited time CDPR could even invest into combat system to fulfill some of the promises they are making. 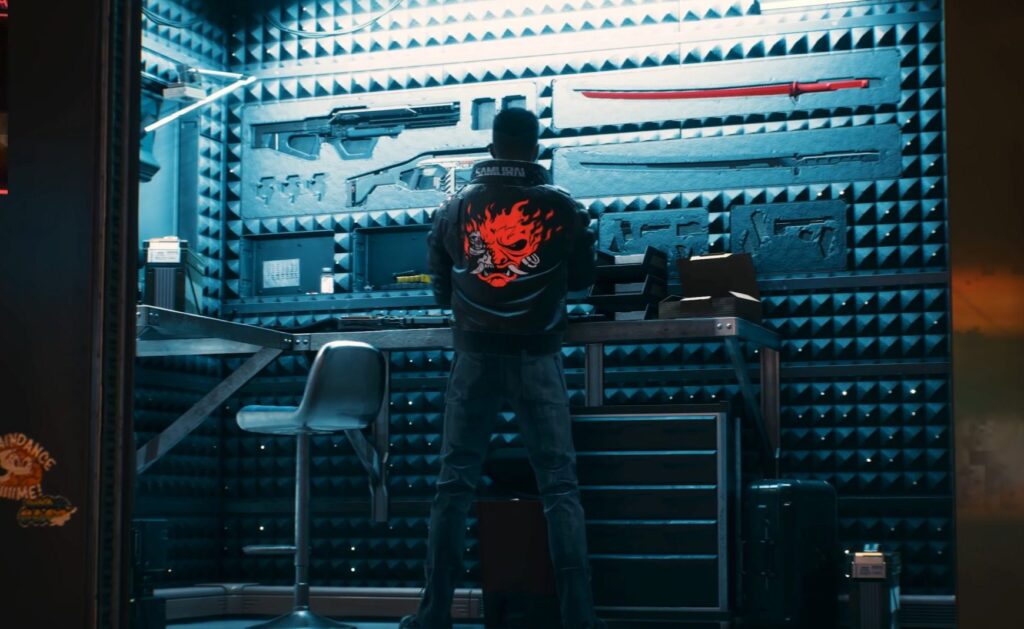 Could it be that higher levels of gun proficiency come with abilities that feel something like aiming assistance? Could it take away from the fun for some of us? Possibly.

Could it be that the melee impact feedback and certain aspects of gunfire will still feel significantly worse compared to more deeply combat-focused games? Quite possibly.

Could it be that some of us will find all of CDPR’s efforts to improve their combat system insufficient for the kind of a feeling we were looking for? Very possibly.

Does that mean that all of Cyberpunk 2077‘s many other aspects including story, detail of the setting, leveling system, character interaction, and questing system will feel disappointing? Unlikely.
Well, really, just like with the combat system we covered in this article, it depends on one’s expectations.

But what are your thoughts on this?

Are you deeply concerned about the weapons and the combat system in Cyberpunk 2077? Will this be a deal-breaker for you?
Or can you look past this aspect of the game if CDPR delivers on their other promises and those game elements they are known for getting right?

Let us know in the comments below!

Dedicated contributor at GnarlyGuides and a part-time collector of books she will never have time to actually read. Jumps on the newest releases just as quickly as on the uncovered dusty collections from the basement. For her, shiny graphics can never be an excuse to not have a polished player experience or an immersive story.
Subscribe
6 Comments
Most Voted
Newest Oldest
Inline Feedbacks
View all comments

Hey, Muwapp! Thank you for the feedback.

Why don’t they make sense? I will be honest, it’s my favorite part of writing for video games, haha. I like to dig deep and point out interesting details and then explore their importance.
My format was inspired by similar compelling discussions on other fansites, not all of them on Cyberpunk 2077, of course.

Oh, you are absolutely right, Zigzig! It’s definitely a part-opinion piece.
I played a few FPS games, enough to form my own opinion and that opinion will certainly differ from that of others. Especially of those who played way more than a few!

I occasionally post a bit of a disclaimer on these, reminding people that I am a bit biased in my anticipation for the release and all. I am writing from a perspective of a fan.

Still, thanks for the feedback!

So much yes, Furious.

When I think about fighting in RPGs it usually comes with this expectation of: dodge, attack, dodge, repeat again and again while watching HP bar draining slowly over time. It’s even more so with any projectile attacks.

I would be very happy with being able to deliver satisfying head-shots in CP’2077 while getting to experience other engaging RPG elements of the game.

Above all, I just respect that CDPR is giving this part of the game due attention, even if their central focus is on story and problem solving (as it should be!).

I really like that they’ve addressed the bullet sponge issue, it’s one of the things that drives me crazy in a lot of games with shooting mechanics.