Why Hacking Will Be Fun in Cyberpunk 2077: CD PROJEKT RED’s Take on Netrunner Class

Cyberpunk 2020 RPG system gave its players many reasons to play a Netrunner class. Both the defensive and the offensive abilities of such a character were quite fun and impressive, combined with a free and daring spirit of surfing the boundless Cyberspace like nobody else. With its aspirations to an open and responsive world with no class system, can Cyberpunk 2077 make Netrunner skills worthy of a player’s attention?

In the first 48-minute Gameplay Reveal that we got in August of 2018 we got the first glimpses of the Netrunner character skills in Cyberpunk 2077. While developers kept warning the viewer that nothing in the demo is set in stone (the game being a very much work in progress) what we got to see appeared quite polished and quite promising.

One of the most notable parts of the 2018 preview was the first major quest that V and her trusty companion Jackie had to complete to gain trust of an elite client. It entailed recovering a valuable piece of Corp technology stolen by a powerful gang, but the narrator walked us through a path that didn’t involve busting through the doors.

That didn’t pan out all that well and the duo found themselves locked inside a factory plant going through a technical meltdown, surrounded by hostile gang members. As V and Jackie found their way out swiftly dispatched the enemies and cleverly taking out the area’s boss, we got to see a major role hacking played in their escape…

Aside from the role hacking played in the final battle (locating the boss’s weak point), we saw V hack into the local network through a Neural SIN of one of the gang members to mess with the system and pave an easier way forward by enabling Quick Hacks. On the image below, we see V neutralizing a gang member’s firearm before jumping into battle. 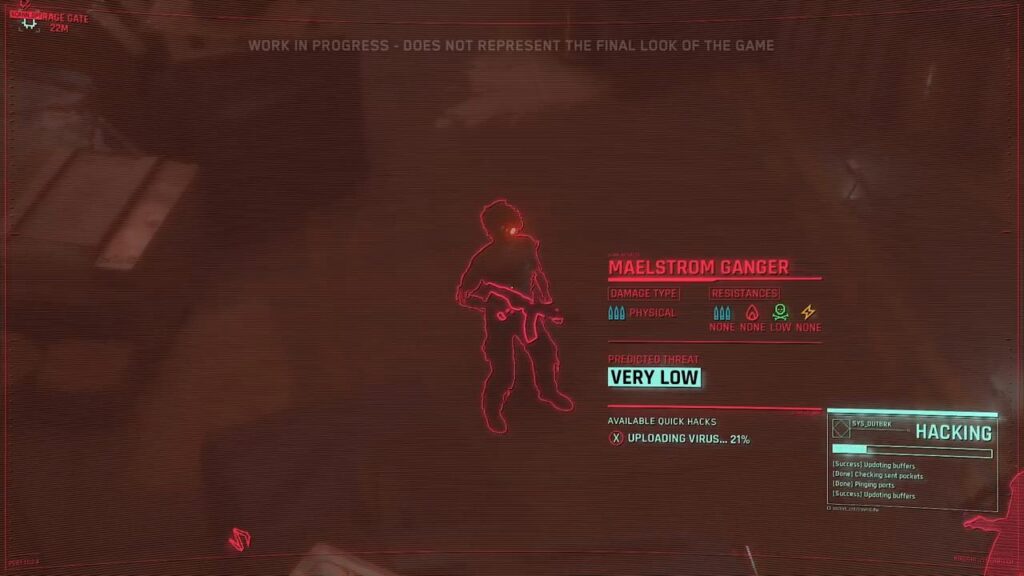 Even among impressive high-level combat maneuvers and powerful weaponry, this impressive feature managed to stand out. It told the players that Cyberpunk 2077 does have new features we haven’t yet seen in RPG games before: that every hostile location can be approached and navigated in entirely different ways using the Netrunner’s skills.

New Developments on the Netrunner Experience

A few months ago the new Cyberpunk 2077 Deep Dive Video came with some changes and new promises for the Netrunner abilities. We discussed how CD PROJEKT RED demonstrated the Netrunner abilities in our news post about the demo, but one thing was certain: everything in the world of Cyberpunk 2077 is connected to the network in one way or another, and Netrunners can manipulate that fact to obtain incredible advantage.

The developers changed the way a character would access the local network: this time their Netrunner character hacked into the system through a remote access point and used their Cyberdeck to match the code in order to unlock different levels of access. The character didn’t have to choose a single item to unlock: the more correct instructions they put in, the more access they could gain over the local systems. That meant using the network to take out the enemies from distance, creating distractions, diminishing opponent’s firepower, and disabling surveillance. 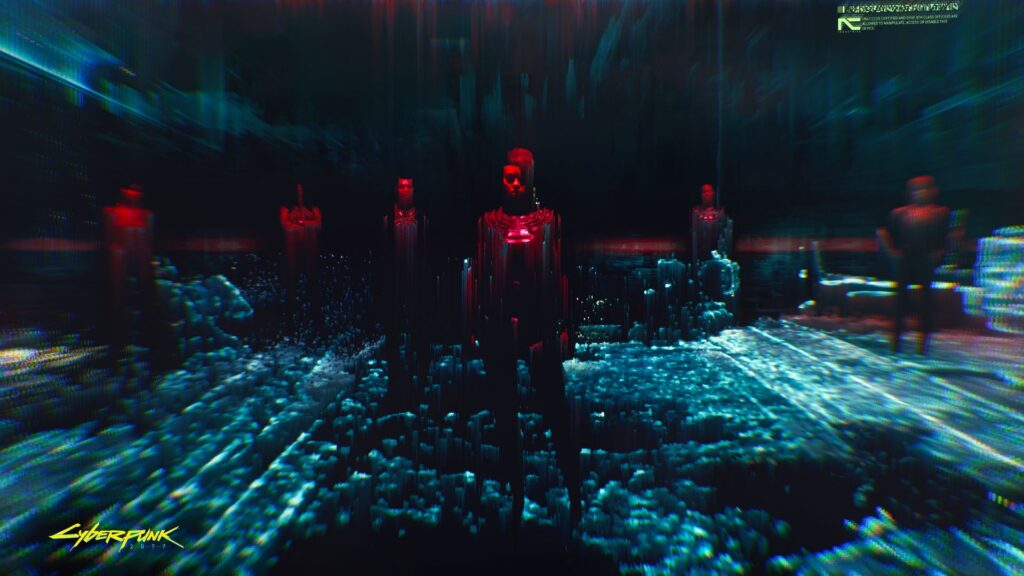 In other words, any hostile territory can be approached in a great variety of ways that don’t end with the character’s personal dexterity and stealth. A Netrunner with a weaker weapon can be as dangerous as a Solo (a melee build) with a powerful gun. Besides, messing with training robots, cameras, and vending machines can be something that adds more flavor to any mission and makes the world feel more interactive and palpable for the player. The surroundings become a puzzle challenge with a reward of even the most powerful enemies not being able to see you coming.

CD PROJEKT RED have put a lot of work into Cyberpunk 2077 since the beginning and have been very responsive to their fans, so it’s not surprising that they gave a lot of thought to the Cyberspace network and its manipulation – such an important of aspect of the Cyberpunk setting.

The concept art we used as a title image for this news post, in fact, served as an inspiration to what Netrunners would be able to do (and it’s not out of bounds to think that the player would get that experience as well): Kyle Rowley, the Associate Design Director at CDPR before he left the company in December 2018, described the image as representing “one of the core gameplay pillars,” implying extensive manipulation of the world through the network. 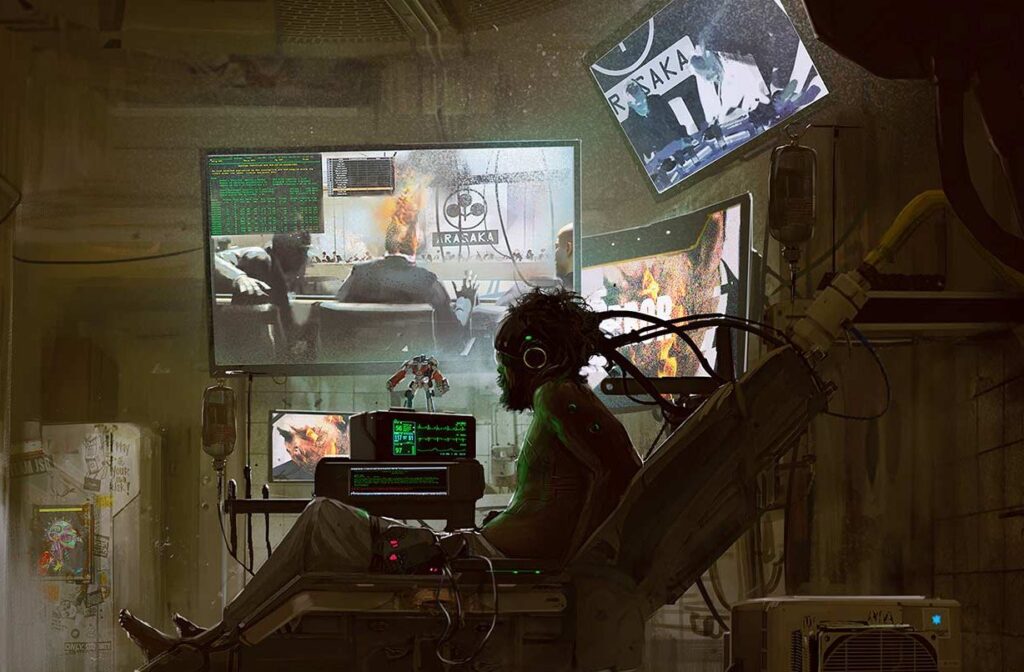 Sitting in their Netrunning chair, the stranger outfitted with wires coming out of their head is assassinating someone important without even being in the same building. We saw this idea make a brief appearance in the Official World Premiere Trailer, as an important leader got their hardware fried during a business meeting through his wired connection. However, the action here is seemingly performed by T-Bug, one of the best Netrunners in the Night City and our ally in the original gameplay video for Cyberpunk 2077.

How much cooler can this get? How far will the developers let a Netrunner character go? With Cyberpunk 2077, network hacking takes on a new meaning and with how powerful these skills are for investigation, offense, and defense abilities there seems to be no limit with how much power a character could wield.

There is no doubt that something like this will produce an exciting, quite unique game experience.