To be more exact, can Cyberpunk 2077 offer us that unique open-story experience we associate with Tabletop Roleplay (games like Cyberpunk 2020 or Dungeons & Dragons)?

Before you violently roll your eyes and declare this question as entirely ridiculous, allow me to explain myself.
First, let’s remind ourselves why Tabletop Roleplay is even a part of this discussion.

Cyberpunk 2077 Would Not Exist Without Cyberpunk TTRPG

Cyberpunk 2020 is a Tabletop RPG, the pen-and-paper experience we associate with Dungeons & Dragons. Cyberpunk 2077 is a video game RPG, more easily comparable to Witcher and Grand Theft Auto experience, than a TTRPG one.

However, there is a reason why we have been bringing Cyberpunk TTRPG into our conversation about Cyberpunk 2077 since its very early development days: the setting and story of Cyberpunk 2077 is inspired by the Cyberpunk universe and by Cyberpunk 2020 character classes, factions, and items. 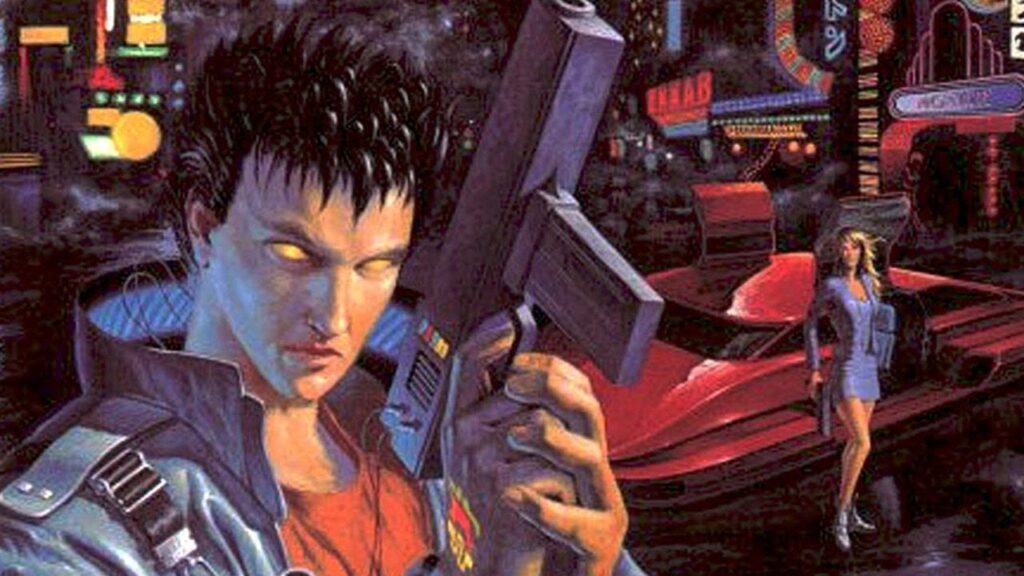 Some items, like the Arasaka Mantis Blades or the Netrunner’s Cyberdeck, are adapted from the cyberware implants that the Cyberpunk players have been familiar with for multiple decades. Other elements, like the story of rockerboy Johnny Silverhand set in the 2077 universe, are heavily changed from the original lore and functionality while retaining the name and general resemblance. They serve as insider references to maintain the familiar as well as intriguing atmosphere for the fans. 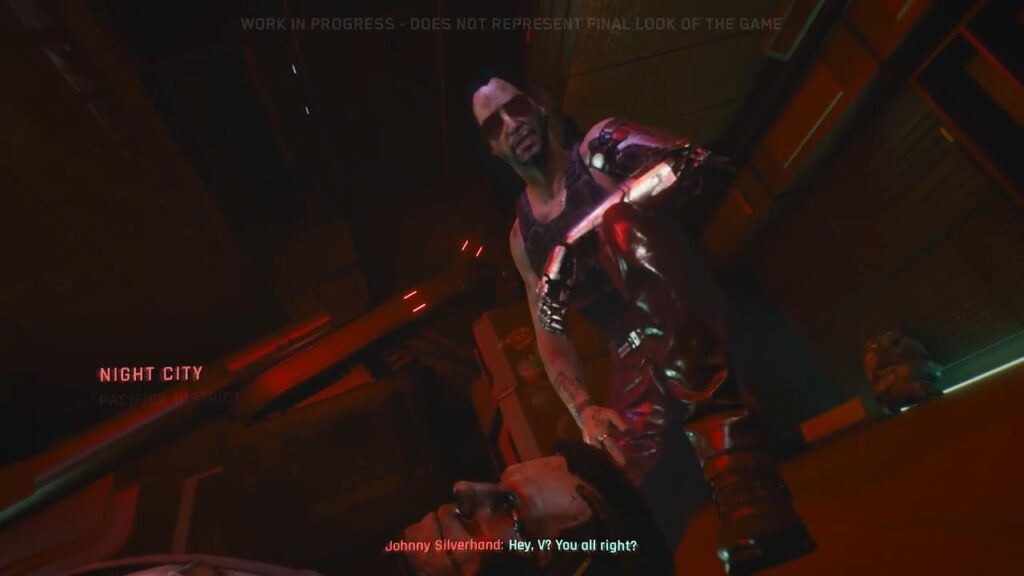 Also, if you have been keeping track of what’s in the works, you know that Cyberpunk Red is due to be released this year as a prequel to Cyberpunk 2077‘s setting and story, in collaboration with the original creator of the TTRPG series, Mike Pondsmith. It is designed to accommodate what we will see in the video game, to the extent of creating its own timeline.

Dungeons & Dragons returned to popularity with its 5th edition, and it is likely you have heard about it or even played it, even if you didn’t get a chance to try out Cyberpunk 2020 yet. The more you are familiar with one or the other, the more what we will be talking about will make sense to you.

And if you are familiar with either of them you will understand the following intuitively: single-player computer RPGs can’t be played like TTRPGs.

It’s just the reality of our current and potentially permanent video game limitations. TTRPGs involve Game Masters and they often involve Player Parties with more than one player. With the human brain presiding over the world, events, and characters that are generated in the moment in response to the player actions, there are no precise scripted events. 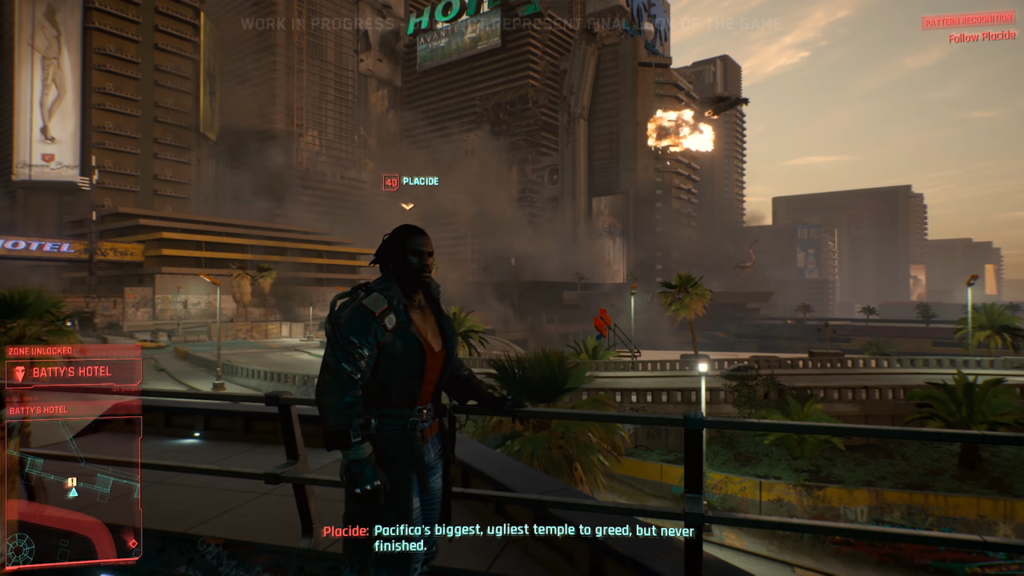 If you’ve ever played a role of a GM in a TTRPG campaign you know that you can’t rely on the pre-session prep notes.

Your players will ultimately wander into places that don’t exist, take events into directions that you did not expect, dismantle puzzles with solutions that you couldn’t predict, and react to your NPCs in all sorts of both frustrating and delightful ways. Rarely will a combat or a dialog encounter go according to plan. Rarely will the story and its ending unfold in a way you first envisioned it. A lot of GMing is a highly creative process of improv.

Video games can’t scrap that script, since they can’t completely alter the story to match your exploding creativity. Certain events simply have to occur in order for the game to progress, even if the developers allow you to skip certain quests. Dialogs can’t be freeform while still retaining their strain of logic: you will be faced with multiple choice format even if the resulting outcomes are numerous. 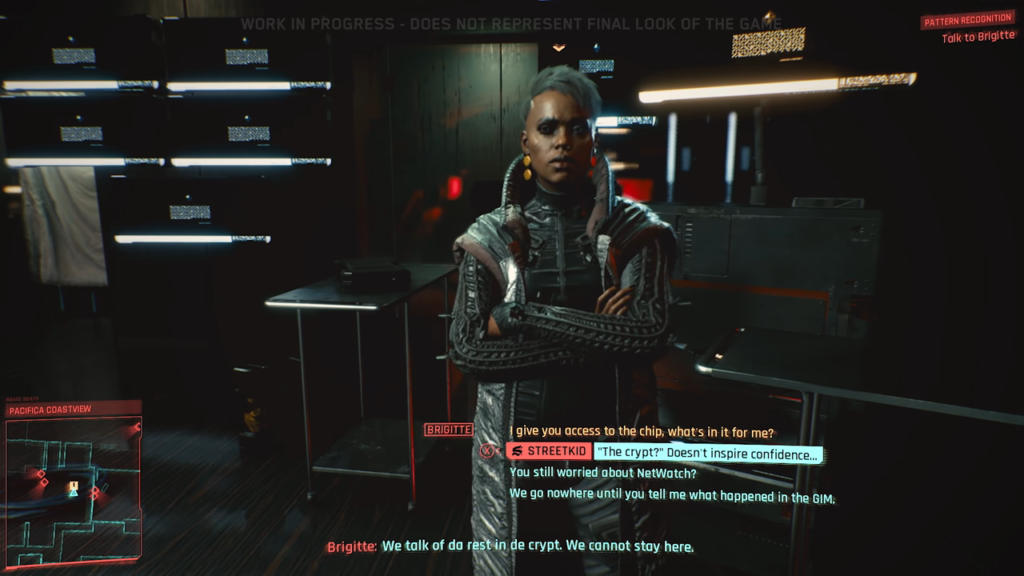 Even Cyberpunk 2077, 8 years in development and with one of the most talented game development teams behind it, can’t break these limitations.
So, the technical answer to the question posed by this post, “Is Cyberpunk 2077 like Cyberpunk 2020 or D&D?” is… no. No, it is not.

But a much more compelling answer is, the developers sure are trying to make Cyberpunk 2077 feel closer to an extremely immersive solo TTRPG experience and it’s darn exciting.

In order to address this question with the information available at this time, we can look at how the developers are discussing the game’s features in its polishing stages.

Fans of Witcher 3 will have a few points of comparison, since the developers reference their famous game when they make promises in regards to Cyberpunk 2077‘s features. Many of us know Witcher 3 for its exciting non-linear story progression, but as Philipp Weber (the Quest Design Coordinator) told us in the Deep Dive Video Q&A, Cyberpunk 2077 will also have a new non-linear “gameplay approach.” In addition to having story consequences to every dialogue choice made by the character, now “players have all of these different choices to solve a situation” with their own consequences. 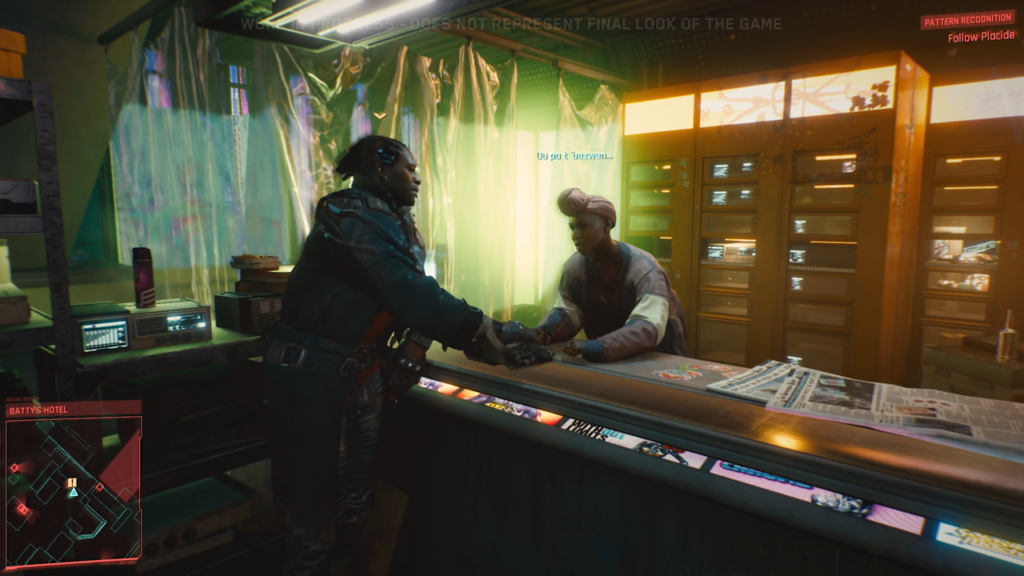 When we listen to Miles Tost (the Senior Level Designer) from the same Q&A, we get the idea of what they mean by that. When confronting an obstacle in the form of a door, the guard of which requests you to surrender your weapons before proceeding forward, the potential solutions are much more diverse than we would expect: there is a social approach to the problem in the form of chatting the guard up; there is an aggressive option of taking the guard out and further wreaking havoc on the other side of the door; there is the athletic feat of jumping balconies to enter the guarded room through one of the windows; and there is a hacker’s way of disabling the security system and having your enemies at your mercy.

Each of these approaches could open up a completely different way of completing the quest. Vice versa, assassinating your target from a balcony before even getting a chance to meet them will progress the quest, even if it means that you will miss out on an entire segment of the quest that would come from the social interaction with the aforementioned target. As Miles and Philipp discuss in a series of premium podcasts for GameStar (translation courtesy of Reddit user Moraez), the possible solutions that the team is considering for any given quest are only limited by the character’s death. 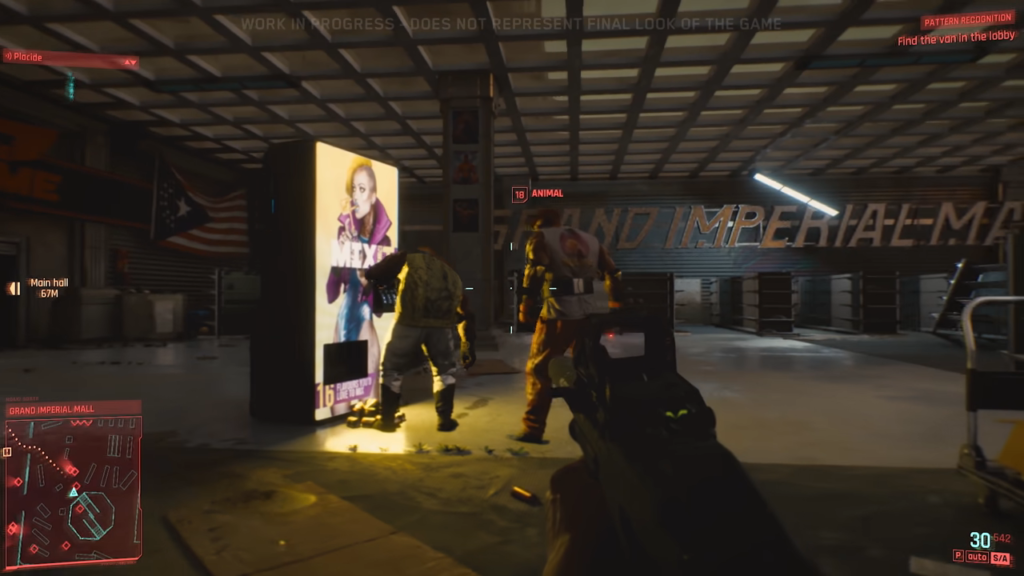 The level design improvements are promised to be on par with the changes CD Projekt Red implemented between Witcher 2 and Witcher 3, just to give you an idea. We can expect about 3 times as many solutions to every mission: the team and their testers relentlessly repeat every quest in Cyberpunk 2077 to come up with new ideas. Paweł Sasko, the Lead Quest Designer, summarizes this philosophy as “freedom”.

Now that’s starting to sound more like a TTRPG experience, doesn’t it?

Here is another important point: the map markers in Cyberpunk 2077 will be reduced on purpose to create a less grindy experience as the player progresses through the game. Jumping from one quest marker to another is one of the typical experiences in computer RPGs.

This is one of the features that differentiates video games from more involved TTRPG experiences, where the packed quest journal is replaced with a few meaningful tasks that are usually intertwined with the party’s goals or the main quest in one way or another. That’s what CD Projekt Red is trying to do with Cyberpunk 2077: high density of smaller quests being replaced with a few that are very polished and reveal something significant about the setting or even the main story. In other words, everything you do will be engaging and will affect your main quest progression. 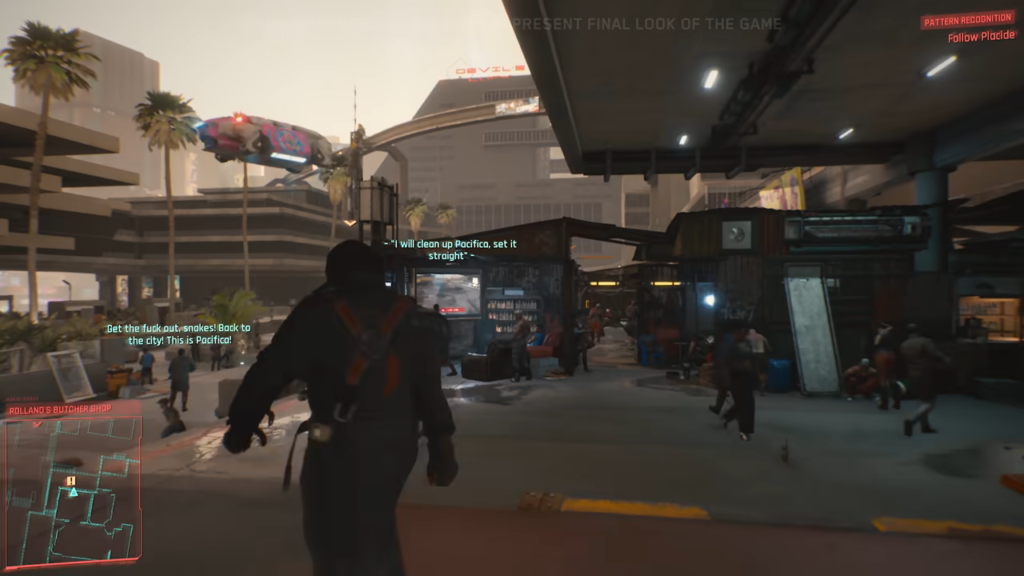 To make city dwellers more believable, about a thousand of them will be given their own daily routine, so you can find a good number of NPCs doing something interesting throughout the day (and night!). This ability to observe any NPC we wish in high level of detail is also something we don’t typically expect from single-player video games but can be much more available under selective attention of players in a TTRPG campaign.

To wrap it up, we will mention a few more obvious points: the variety of equipment, weapon, and Cyberware customization options with additional modifiers; the ability to chat up NPCs, have story encounters, and discover meaningful locations when travelling on foot; timers on certain dialogue options to recreate a feeling of having a real-time conversation with an NPC; Techie’s pet robots to assist them in the field at their command… 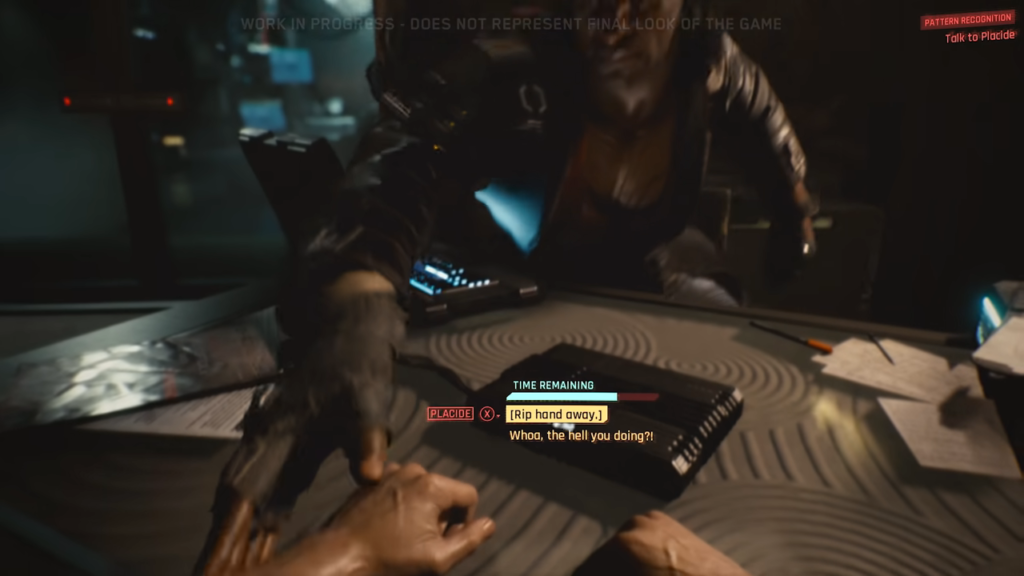 While some of these features are familiar to us from our video game experiences, their combination with the surprising diversity of quest choices and the heavy emphasis on story immersion does begin to form a unique picture. In a way, this experience might not be very easy to imagine due to how overwhelming the quest progression tree begins to look once we factor in all of the options. While Game Masters have the ability to give this degree of depth to approaches that their players choose to focus on, CD Projekt Red, in a way, gives this depth to all approaches they think their players could focus on.

So, what do you think? Are you a passionate TTRPG player or a GM who can notice and appreciate some of these parallels?
Or maybe you think that even with this scale of detail Cyberpunk 2077 will have almost nothing in common with the TTRPG experience?
Do you think that what CD Projekt Red has in mind will be revolutionary in regards to how it will affect the RPG genre and the gaming industry? With the massive attention and support it received so far, could it be argued that it already left its mark?

We would be very eager to hear your opinion!