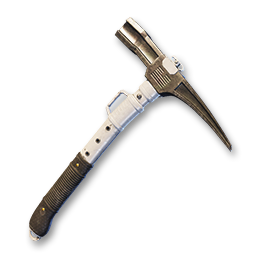 Pickaxe that can be brought from Orbit. Expensive but sturdy, provides excellent yields.
Research Cost:

So, I wanted to weigh in on as many of these reddit posts as I can regarding the jushi and sui shi…
I’m our group’s primary miner, and I’m here to tell you- The Iron pick axe lasts longer than the Ju or Sui -> My Dong Impressed EVERYONE, so i got a second one as they’re just amazing for how cheap they are — Well, I waited, and waited for the 3rd tier hearing it had 500k durability (TOTAL HORSE S**T).
I was incredibly let down, it lasts no longer than the Dong and hardly the added rewards.. If, you basically ONLY mine Iron, you’ll get about an inventory full before you’re getting worried about it breaking soon (relatively).
Yes, it gives better rewards, (I started with the Jushi because we literally, every single mission, need copious amounts of Iron) Reading that it was 500k durability, I was suuuper excited to see just how long this pick would last (Supposedly on par with Titanium?)
>>>> Oooouch, not even the flavor text made me feel better about this pickaxe..
“A pick axe ain’t never run outta power.” – Sol
Well Sol, you made another pos item to bring with us down to the planet. I found one 2 tier cave, mined everything like I would my Dong (as I was testing the total capability for our group-)
>> Oooouch << It broke in the first cave after mining 100 stone, 50 sulfur and 100 oxite..  my Dong lasted longer, and the flavor text actually fits that one!
“A tool to break the soil of many worlds.” With this tool, we have been able to rush platinum tools, which was bad ***! I was truly hoping the Ju and Shu were at least a little more durable… It was an incredible let down-
For those who were waiting and holding off, get the dong and the axe lol, most missions, I never break my axe (and again, I’m normally the primary and dedicated logging/miner)  My Tier 2 axe, “Sen”, and Tier 2 “Qie” Knife is just absolutely amazing, I’ve literally never broken either of them on an entire mission (though, I will break it if we ever made it all the way through tier 4 on any of these missions…