The release of Bethesda’s smash sequel Fallout 4 last week, has taken up every bit of spare time I have. Fallout 4 is much bigger than all of its predecessors, and there is so much to do and many ways in which to do it. Fallout 4 is so big and so really-rather splendid, that you should be lucky I’ve surfaced long enough to write this. This quick list is of my top ten hints of surviving in the wastelands of the commonwealth, and its difficulties from radiation to raiders.

The water in Fallout 4 has absorbed a lot of the radiation from the nuclear fallout. Whether you’re drinking it or trying to wade through it, you will be affected by the radiation. In the case of swimming or wading the radiation effect is strong and can leave you weakened or dead within seconds. Even drinking it should be reconsidered, although you get some health back your radiation level increases.

Stimpaks in Fallout 4 are a valuable resource, and should not be used willy-nilly. When it’s safe, use a bed to restore your health, which is also handy for the temporary 10% exp buff, and if your companion succumbs to the onslaught of any attackers, don’t use a stimpak on them unless absolutely necessary. They’ll get up and move around after the fight anyway.

Although it’s tempting to jump into your power armour at every available opportunity, you should make sure that you always have a spare fusion rod. It’s much better to know you have enough juice in your armour for when it really counts. As a side note, you can’t die from falling damage when wearing your power-armour, so if you need to drop a long way, the power armour is ideal, but just because you won’t be damaged doesn’t mean your power armour won’t be.

I would definitely advocate getting the Local Leader perk as quickly as possible, mainly because once you have set up your trade network, you only have to worry about one pool of junk resources. The Local Leader perk requires you to have Charisma 6 and then no matter which settlement you offload your junk to, it can be used in any of your settlements. 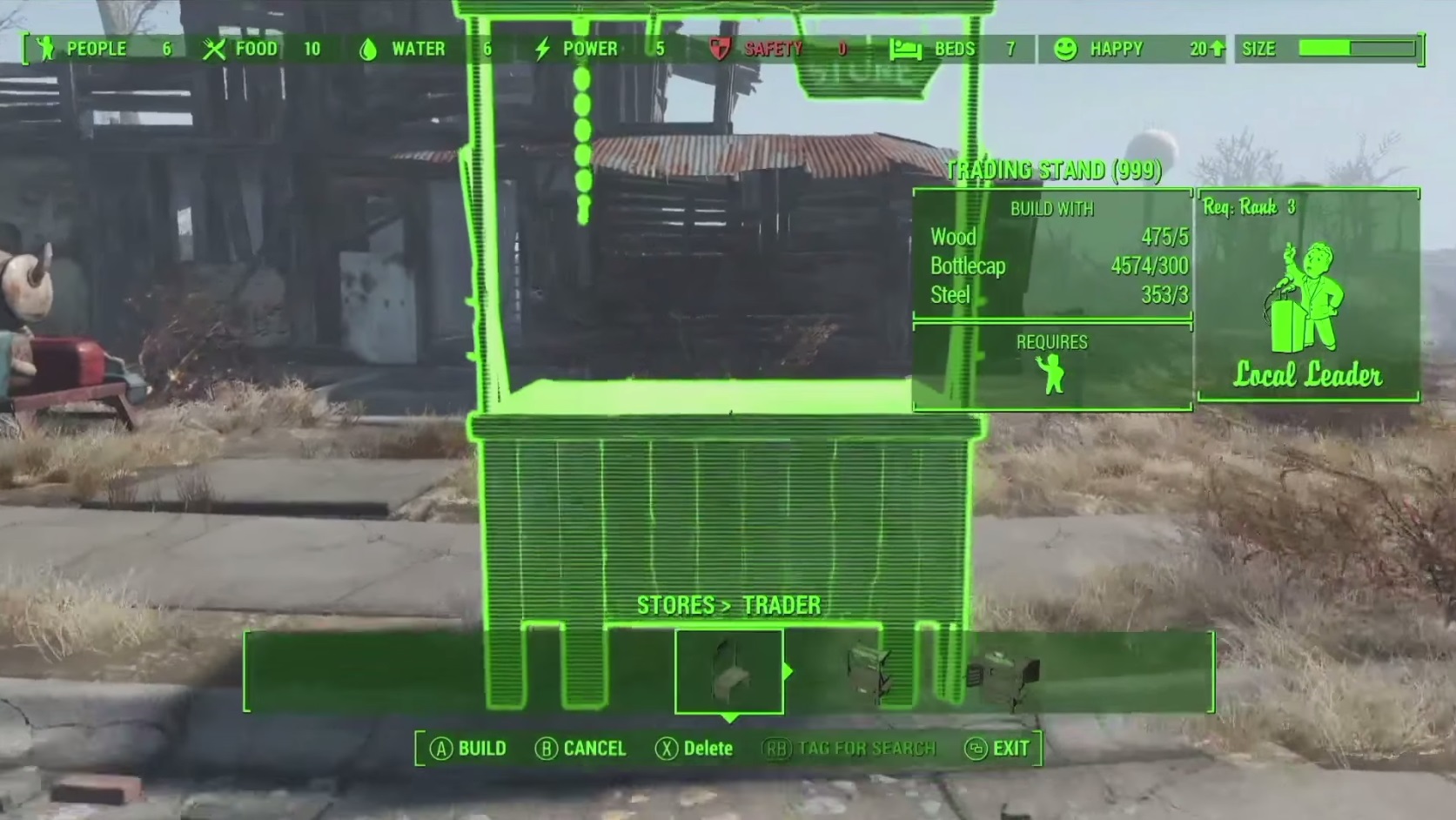 5. Scrap as much stuff as you can

Building the settlements up is a big part of Fallout 4 for me, and for me to do this successfully I need to ensure a good amount of scrap is ready for use. This can be done in a number of ways. Firstly, when you get the option to develop a settlement, scrap as much of the yellow glowing stuff as you can, most of the time it’s basic ingredients like steel, and wood but you can occasionally get hold of something a little more useful. Secondly, always be on the lookout for rare scrap. Adhesive is useful for any weapon or armour mod, oil is useful for defense turrets, and circuitry is useful for high-end creations. Use the scrap targeting system to ensure you can always identify the scrap you’re looking for.

6. Get Yourself a Stout Stick

Have a strong melee weapon handy. Although a crowbar, pool cue or baseball bat is not the most ideal weapon for dealing with a load of well-armed raiders but when you’re going up against radroaches or bloatfly’s it may be just the thing. If you don’t have to use a firearm then don’t, you may need the ammo later on and beating a radroach with a crowbar now could mean you’re not going to run out of ammo when facing that super-mutant later on. 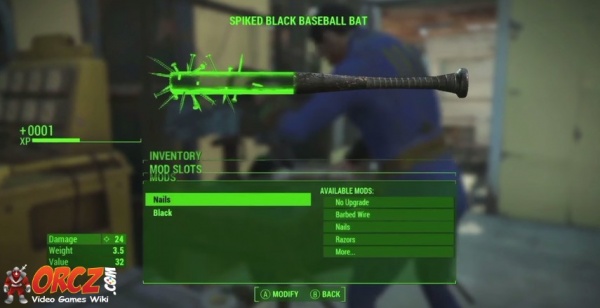 Don’t rush through the main questlines. In Fallout 4 a lot of side quests can be found by speaking to the various inhabitants of the wasteland, or overheard from passing conversations. Don’t be afraid to peek and pry into everything in order to unlock these quests. It’s not only speaking to people who can reveal quests  but so can hacking into computers, reading leaflets and posters and listening to radio stations. Stick your nose into everything. 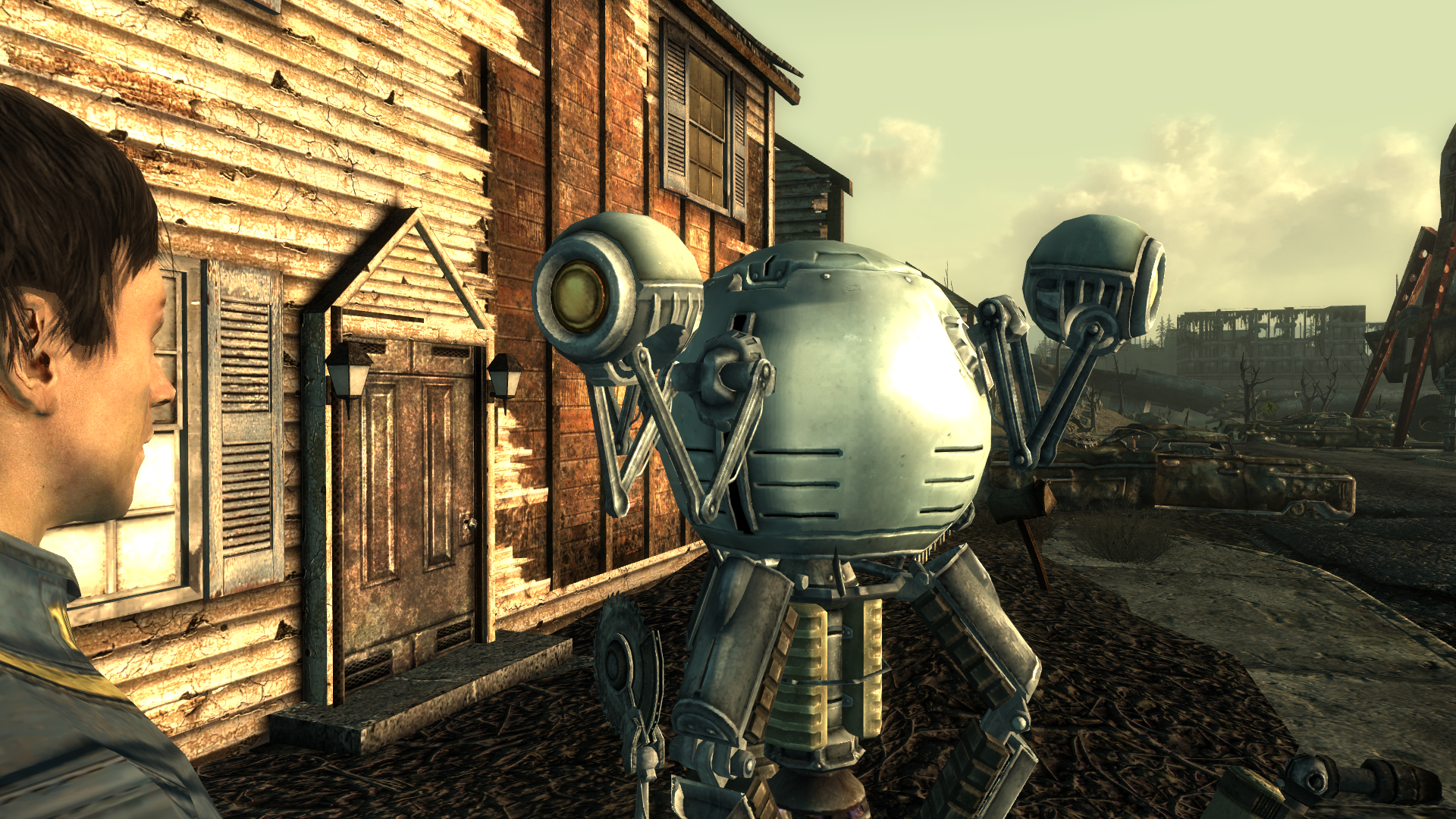 Presumably owing to the decline in entertainment available after a nuclear war, drugs are a big and readily available thing in Fallout 4. Offering a brief temporary boost to one or more stats, but when addicted incur a bigger penalty on the user when suffering from withdrawal. I prefer a simply abstinence to all drugs as addiction is a far bigger penalty than the boost is worth. The one exception to this for me is Buffout. Buffout offers a quick boost to strength/carrying ability, which is perfect for getting back to a settlement when you’ve overloaded yourself.

A big tip this one, if you’re over your head you don’t forget that you can run away. Sometimes things are too big, bad and angry for you to deal with now. Run away, gain a few levels, re-arm and then kick some ass. Worth noting that running uses the same bar as V.A.T.S. so make sure you’re not going to need to run anywhere before emptying your AP bar.

As you play Fallout 4, you’ll get the option to have a number of companions join you on your adventures. When they join you, you can send them to specific settlements. I find it easier to send them all to the same settlement, Sanctuary in my case. Not only does it increase the amount of people who live in the settlement, but you know exactly where each companion is going to be. Just because it’s a nuclear wasteland, doesn’t mean we can’t be organised.

There you have it, my top ten tips for Fallout 4. It’s in no way exhaustive and there’s likely to be more and more as Fallout stakes it’s claim to every minute of my free time.

Jim Franklin is a freelance writer, living in Derby UK with his wife and his player 3. When time allows he likes nothing more than losing himself in a multi-hour gaming session. He likes most games and will play anything but prefers MMO's, and sandbox RPG's.
Subscribe
1 Comment
Most Voted
Newest Oldest
Inline Feedbacks
View all comments