You’ve trekked through the heavily irradiated Glowing Sea to find Virgil, an escaped Institute scientist. Virgil has told you how to obtain access to the Institute. You’ll have to find an Institute Courser and kill it in order to gain access.

If you feel confident and are ready to fight the Courser, simply make sure the quest is being tracked. The location of where you have to go is on the map, so fast travel to it or as close to it as you can.

Once at the C.I.T. building, turn your Pip Boy’s radio to Courser Signal. Signal strength will be shown on screen. You will want to get the signal’s strength to be as high as possible. To do this go to Greenetech’s Genetics building and head inside. You may run into a group of raiders on your way there.

Inside the Greentech Genetics Building

Once inside, turn off the courser signal, as you won’t need it any longer. Be ready for heavy fighting. Inside are a large group of heavily armed Gunners and auto turrets. Mines are scattered around the open area, so keep your eyes open.

You are going to be fighting your way to the top of the building. Take the stairs on the right as you enter the main area. Move through the catwalks on the second level, fighting through the Gunners until you reach the next flight of stairs.

On the third floor, on a white table in between two red couches, is a copy of Massachusetts Surgical Journal. Make your way through the third floor until you come to a bridge in between the sides of the floor. A handful of Gunners will be watching this bridge, and it will be covered in mines. 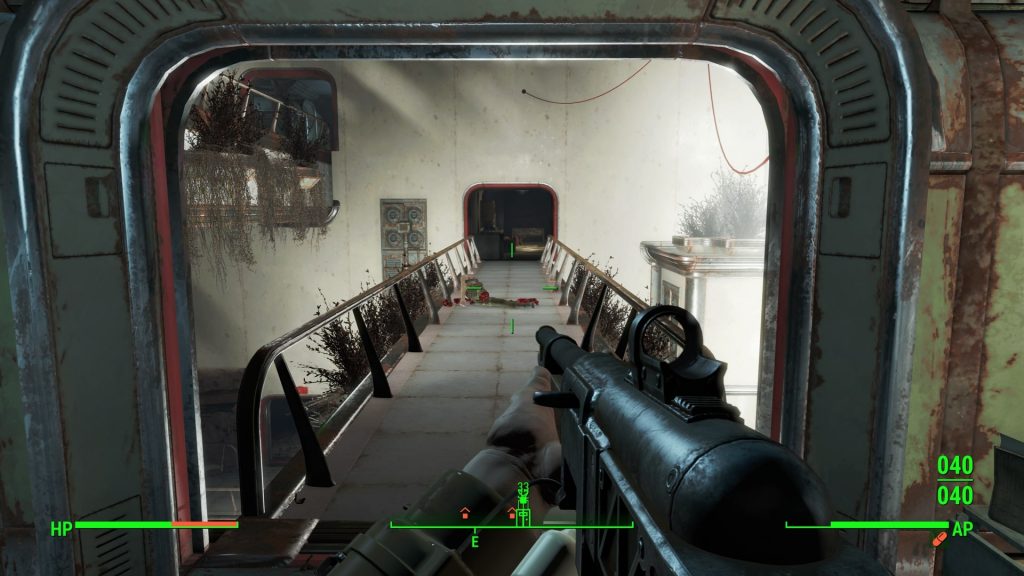 Continue over the bridge and work your way up the building, fighting Gunners and auto turrets as you go. Eventually you will make your way through the path to another bridge, guarded by a Gunner with a missile launcher from a balcony on the left.

Take out the Gunner and make your way across this second bridge. You will find an elevator that takes you the rest of the way to the top of the building. Take it up and exit. Directly in front of you is a master level terminal and a security door. There are two fusion cores you can grab near the row of computers.

At the back of the room is an advanced locked door. Inside is another fusion core and miscellaneous loot. There is another terminal inside as well, which unlocks a door upstairs that leads to ammo and health items.

Continue to head upwards. You will run into the Courser, Z2-47. You can talk to the Courser, but it will end in a fight, so be prepared. This battle is similar to the battle against Kellog. The Courser will use stealth boys to disappear and surprise attack you. Use grenades and continue to shoot him until he is dead.

Once the Courser is dead, loot his body and grab the Courser chip. The quest ends once you grab it, but you’re not done in this area yet.

Open the locked door the Courser was trying to get into, and you will find another synth that is related to a side quest.

You can find the password to the room in the red toolbox across from the locked door. Make sure you also loot the green chest on the stairs, there’s a fat man launcher and other loot for you to grab.

As soon as you have killed and looted the Courser, the quest will end, and the next quest, The Molecular Level, will begin. This quest will lead you back to Goodneighbor. to have the Courser Chip analyzed.