Radio Free Monarch is a main quest in the game and will progress you towards Phineas’s ending. It is probably the longest questline in the game and you’ll need to finish multiple side-quests to complete it. It is nearly identical to the Board’s version of the quest, Signal Point in Space, so both walkthroughs we offer for these games will be similar. Nonetheless, you can complete both quests at the same time to experience as much of the game as you can – all you would need to do is to contact the Board and follow with their questline (in that case you would have to, uh… make some changes if you didn’t help the Edgewater during Comes Now the Power… retroactively). This quest precedes The City and the Stars from Phineas’s questline.

After finishing with Nyoka we will progress the MSI’s questline, travel to the broadcasting tower to learn our objective in regards to stopping the ceaseless broadcasts by MSI and Iconoclasts, and then complete Sanjar’s quests to complete half of our main objectives.

BOLT with His Name 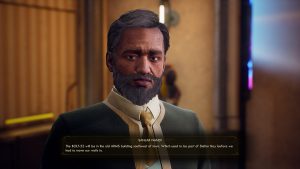 You will need to complete BOLT with His Name in order to progress Radio Free Monarch. We have prepared a separate guide to walk you through each step!

Overview:
This quest will involve you getting into a locked room in the ARMS building located not far from the city’s south gate, handling Sanjar’s documentation, picking up the BOLT-52 Cartridge, and reporting back to Sanjar. When you submit the quest, Sanjar will direct you to Fallbrook with the next quest, Errors Unseen.
We will stop by Fallbrook as a part of the main quest, but we will handle Errors Unseen in its entirety later. 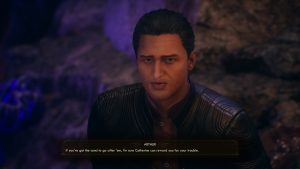 You will now need to complete Errors Unseen – we have a detailed guide that will help you through it!

Overview:
Sanjar, suspecting that one of the corporations is operating on Monarch illegally, will send you to Fallbrook to talk to Catherine Malin, which will in turn get you involved in a rescue mission of her supply team. The survivor of the ambush will point you to the UDL Lab overrun by marauders where you can obtain the research data for the quest, and the Gloop Gun science weapon for your collection. When you deliver this to Sanjar, MSI will no longer be bogging down the radio with their broadcasts.

Now we will need to work with the Iconoclasts to convince them to stop broadcasting.

Part Four – The Commuter & Pay for the Printer 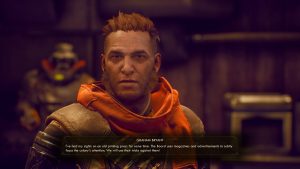 We have a separate guide for you that deals with the details of this quest!

Overview:
After you travel to Amber Heights to convince Graham that radio might not be the best option for him, he will entrust you with obtaining the printing press parts from Carlotta’s compromised warehouse to launch an alternative media for spreading of the Iconoclast ideology. You will have a choice of an additional supply that will determine your ability to mend things between MSI and Iconoclasts in the future. After you bring back bad news, the relationship between Zora and Graham will sour even further.

Pay for the Printer 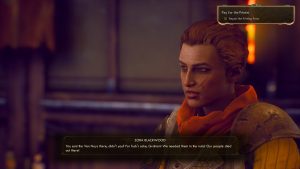 After you complete The Commuter, Graham will assign you Pay for the Printer, which we have a detailed guide for!

Overview:
While Graham will be concerned with you installing the rollers inside an abandoned Terra One Publications building, Zora will be far more concerned about her people. This time you can satisfy both leaders if you help out August and May Van Noy at the location of the printing press building. Graham will promise to stop broadcasting, but the situation will not be resolved completely just yet.

(You should now check with Zora and pick up her Sucker Bait quest to have the option of the best outcome of the quest Canid’s Cradle, which will come about later, but any of these actions will not affect the Radio Free Monarch.)

You have now completed both parts of the main objective!