Now the Fallout 4 Survival Mode has been released eating and drinking is even more critical to your survival in the Commonwealth. Rather than simply being a quick way to replenish your health, your character will now severely suffer and eventually die if they don’t eat and drink at regular intervals. So, grab yourself a packet of Sugar Bombs and a bottle of Nuka Cola and relax as I talk you through the Commonwealth’s Good Food Guide 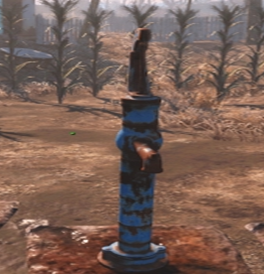 Water is the essence of life in the Commonwealth as it is normally and is the easiest way to hydrate yourself with the least side effects. You can drink either purified water or dirty water but the latter will increase your rads so it’s better to drink the pure stuff.

Once, you start building your first settlement you can start building water pumps. The smallest of the water pumps can be drank from directly, hydrating you fully with pure water. The larger water pumps cannot be drank from directly but they will deposit all surplus purified water into your workshop giving you a good supply. You can also drink directly from streams, ponds and other sources of water but this will give you a few rads, so best to avoid unless you’re desperate.

As a final point, keep an eye out for empty bottles. Empty milk bottles, wine bottles, Nuka Cola bottles etc. can all be filled with water. Using them on water pumps fills them with Purified Water, while using them on streams, ponds, lakes and the like fills them with dirty water.  So you should never need to make your own purified water using 3 dirty water at the cooking pot.

Melons and soups are like the Commonwealth equivalent of super foods because they reduce both hunger and thirst. Melons are a little heavy at a value of 1 each, but they can be grown at your settlement as soon as you have planted the melon crop. Bowls of soup are lighter but they require more resources to make, including dirty water and you may not have the settlement farm to deal with your demand. Ultimately, if you wake up from a good sleep, hungry and thirsty, a melon makes a good choice for breakfast.

If you fancy something a little meatier (and you’ve downloaded the Wasteland Workshop DLC) you might want to try capturing your own radstags. There are a lot of creatures you can trap so why the radstag? Firstly, they tend to be a lot less aggressive and much less dangerous then other caged animals in Fallout 4, but more importantly the cages don’t require any meat to build or fix, just a few carrots which you can grow yourself. There you have it a cheap and easy meat resource. Be prepared, occasionally you will get a legendary or high level stag and the likelihood of your settlement being attacked will increase so make sure you have fairly good settlement defence before trying to cage animals.

For all those wasteland commonwealth survivors out-there, consider finding your way to the USS Riptide, a half-submerged ship jammed under a bridge halfway between Diamond City and Concord. If you clear the place out including the full power armour suited head raider then head to the lower deck and have a look around you’ll find a Wasteland Survival guide that will double the amount of meat you obtain from anything you kill. Of course, on survival difficulty it probably shouldn’t be your first port of call but well worth heading there when you think you can survive.

So, there you have a few quick points to eating and drinking well in the harsh and terrifying Fallout 4 Survival mode. Ultimately, there is only one thing to remember. If you’re hungry or thirsty you’ll eat and drink what you can, even if its vodka and dog food but with a bit of preparation you can make sure you dine out on refreshing water and roasted radstag meat like the sole survivor you are.