After all the waiting, a date is finally here! Game Director Matt Firor has confirmed The Elder Scrolls Online release date. The highly anticipated MMORPG will be released for PC and Mac on April 4, 2014. Console gamers on the PlayStation 4 and Xbox One will need to wait a few months longer until June 2014 to get in on the action. You can read the official announcement on the official Elder Scrolls Online website here, but the news is so important that we’re publishing Matt Firor’s message in its entirety below: 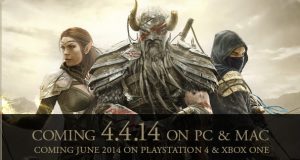 Greetings everyone. As we are approaching the end of 2013 and heading into our launch year, I thought I’d take a moment to thank you, our community, for your continued support. I’d also like to give you an update on the game’s development and our launch plans for 2014.

First, thanks to everyone involved in the ESO community: those we met at trade shows, those of you on social media, and those that have had a chance to play the game and provided invaluable feedback through beta testing. I personally am humbled by the intense feelings of excitement expressed to us by the community at large. At shows like PAX East, PAX Prime, Gamescom, Eurogamer Expo, Paris Games Week, etc. – we always had three to four hour lines to play ESO. We know those wait times weren’t easy, and the great patience and enthusiastic reception you showed was remarkable. Everyone here at ZeniMax Online appreciates each and every one of you and your fantastic support of the game.

Game development is coming along very well. We completed major systems development, and are focusing on making this the Elder Scrolls game you expect: polishing the hundreds and hundreds of hours of content, making combat even more fun and responsive, fixing quest issues, and much, much more. In fact, we plan on spending the next few months before launch reacting to the latest feedback from internal and external testers and gameplay data we have collected.

As some of you know, we’ve been in beta testing for about a year now, leading up to our most recent test in late November where we had over 300,000 people in the game over a 48 hour period. We’ve had approximately 4 million people sign up for beta and that number continues to grow. We hope that just about every one of you who have signed up for beta will get an invitation to play sometime between now and the weeks before launch. These tests are very important, not only for gameplay feedback, but also to test our infrastructure. Beta tests can sometimes be a little rough when we are testing some systems for the first time with large numbers of players. So thank you to all who have participated for your understanding and support. It is very much appreciated.

Worldwide demand for The Elder Scrolls Online is extraordinarily high. This means we need to do a staggered rollout of the different versions of the game to spread out the initial service load and ensure an enjoyable, smooth gameplay experience. It is not only a game we are launching – it is a large online service as well, and our number one priority is to ensure a trouble-free, stable rollout for everyone.

We long ago promised that as soon as a version of the game is ready, we will launch it. So we’re happy to announce that the game will launch worldwide for PC and Mac players on Friday, April 4, 2014, while PlayStation 4 and Xbox One fans will see the game arriving on consoles in June 2014.

Again, thank you for your continued support and enthusiasm over the past year. We are very proud of this game and excited to share it with you. We can’t wait to see you in the game in 2014!  —Matt

Are you excited by the news? It’s been a long time coming, and it’s great to finally know The Elder Scrolls Online release date once and for all. April 4, 2014 can’t come fast enough!