Elder Scrolls Online – PvP – Where do you stand?

Player vs. Player is one of the most blood boiling, anger inducing aspects of any game. Yet, it can be one of the most exciting parts as well. My first real experience with PvP was Dark Age of Camelot (DAoC). For those of you who have not had the privilege of playing DAoC it is a Realm vs. Realm (Tri-Realm) combat system, similar to what we’ll be seeing in Elder Scrolls Online (ESO). DAoC is a game that put this type of PvP on the map, and not many developers have wanted to attempt building a game with this style, at least not until Guild Wars 2.

I talk to my guildies a lot about their expectations of Elder Scrolls Online, and some talk about how they are PvE players and do not like PvP and they doubt they will even try it. I asked these guildies if they ever played DAoC before, and normally the answer is no. I tell them that PvP in DAoC didn’t feel like the PvP they’re used to. Prior to Dark Age of Camelot I was a major dungeon grinder, even doing a little role-playing, but DAoC changed me. It turned me into a junkie, I couldn’t get enough of it. There was something about PvP in DAoC.When I stopped playing DAoC and began to play World of Warcraft (WoW), the first thing I noticed was the difference in PvP styles and even to this day, I can’t stand doing the Battlegrounds or Arenas. DAoC provided me with an endless thirst, continuously wanting to get more Realm Points, to make my character that much better. If I had to compare the feeling I got while playing DAoC PvP to anything else, it would have to be the feeling I would get while doing progression raiding in WoW: that urge to push forward, that unquenchable desire get revived and go back out there and avenge my death.

Let’s discuss some of the features we know about the Elder Scrolls Online Alliance vs. Alliance (AvA) / PvP combat. ESO will provide players with access to AvA at level ten, all the way through to 50. This is a feature I will be taking advantage of very early in my adventure. The way it will work is if a level ten goes and talks to the NPC that controls the portal to Cyrodiil, they will then be zoned into their campaign of Cryodiil, but their character will be scaled to level 50. Your stats will be equivalent to a fresh level 50 character. What this means is you won’t have all your skills unlocked but the skills you do have unlocked will do the damage they would do at level 50, so you’re able to contend and defend yourself. Obviously if you are fighting against an actual level 50 your arsenal of attacks will be limited in comparison to theirs, as they have obtained more skill points to unlock new skills from their tree, but you’ll still have a fighting chance. 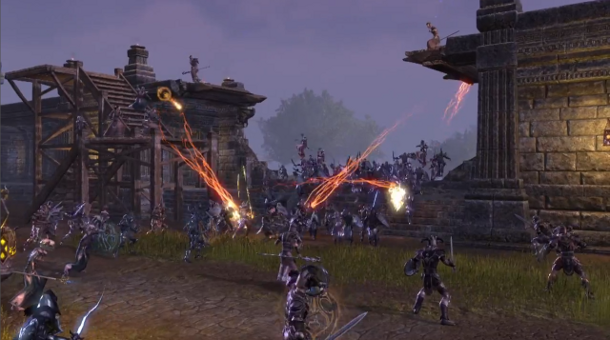 Campaigns is a word we’ve been hearing a lot about for the last few months and there has been some confusion and questions regarding how the campaigns will work. Let me try and explain how it will work in regards to AvA. When I was speaking with Paul Sage (Creative Director for Elder Scrolls Online) at PAX East about Campaigns, he said the easiest way to explain them is to “think of them as servers”. So essentially, each Campaign is its own server, and what you do in your Campaign won’t affect someone else’s. In the event you and a friend are in different Campaigns you will have an option to transfer to his or his to yours. Campaigns will have a natural ending cycle; there has been no confirmed time for this, it could be anything from three months to six months or even longer. The natural ending for Campaigns are needed to ensure that no one team becomes over-powered by the Elder Scrolls.

The Elder Scrolls the Power of the Alliance. If you have played DAoC before you will be familiar with these Scrolls (aka Relics). Guild Wars 2 tried to implement this idea of items that provide faction wide bonuses, their version was called Orbs of Power. This is a tricky area to master when it comes to balancing. You can’t make the orbs too powerful, where a realm that has multiple becomes unbeatable, but you can’t make them under-powered otherwise people will not fight over them and then what is the point of them? The quantities of Elder Scrolls and the bonuses they will provide have yet to be released. Typically these items are kept in a well-fortified keep closer to the faction’s border gate.

Taking keeps will be a key part of the ESO AvA combat system. Their implementation of this is a concept that I have not seen in a MMO before. Typically when you take a keep in a MMO, you bust down the door and kill the Keep Lord, or Jarl, and the keep has been taken. In ESO they are planning to take a First Person Shooter perspective on it. By that I mean you’ll have key capture points within the keep instead. You have to capture and secure the Courtyard, and then push forward to the other objectives, all the while fighting off the defenders. I think this is a great idea for keep-taking combat. With the other systems you would see defenders trying to hold off the attackers, but if the defenders died, the keep was surely lost. With this system it allows for people to get back to the keep in hopes of a second wave of defenders.

Siege warfare is a common element in this type of PvP. In ESO the siege weapons will be slightly different than the ones we might be used to. In previous Siege Warfare games when you placed a ram on a door, it is useable by one person. In ESO it is different. The Rams will require at least three people to operate but a single person can build one. Exact number of people that can fit into a ram has not been released, but we do know that the more people you have in the siege equipment, the faster it will move, and the more damage you’ll be able to do. It makes sense– three people cannot pull back the Ram as far as say six people. Once a keep is under siege it will cut off the keep travel system to that keep. One thing to keep in mind is whichever way you do decide to go, through the door or through the wall, that area of the keep will remain destroyed even if you capture and take control of the keep. So it is always best to plan your attack so you’re able to capture and secure your keep with as little rebuild time as possible.

The keep travel system is a system that will allow a player to travel between keeps instead of running–think of the keeps as links in a chain. As long as you own your entire alliance keeps, you’ll be able to travel to all the links in the chain, but once one keep is taken, that chain becomes broken. You’ll now only be able to travel as far as the chain is long. If there are ten links in the chain, and the enemy forces break the sixth link in the chain, you’ll only be able to travel to the fifth link. This travel system is great, it allows people to get into the combat a lot faster, but with the implementation of the Milegates it will also allow for choke points. If you have played DAoC in the past you’ll be familiar with these Milegates. These gates are essentially bottle necks, where you can stand on one side of the gate and wait for the enemy to run through. These choke points tend to be a stealther’s playground. When I used to play my Shadowblade in DAoC, I would focus on these Milegates and attack the slow pokes of the groups, there is always that one person at the back of a group yelling for the others to wait.

We talked earlier about how PvP can have that urge to push forward, always having something to aim for. One of the ways ESO is doing this is by becoming Emperor. The throne of the Imperial City is empty, it is we the players who will be able to claim that throne for ourselves. Once you have earned the title of Emperor, your progression in PvP is far from finished. Just like everything in ESO there will be a progression to being Emperor, yes that means you’ll be given access to one more skill tree for your character to work on. The exact details on how long you will have the Emperor Skill tree or if you’ll permanently have it has yet to be announced.

Out of everything you’ve learned about PvP what do you consider to be your favourite aspect? 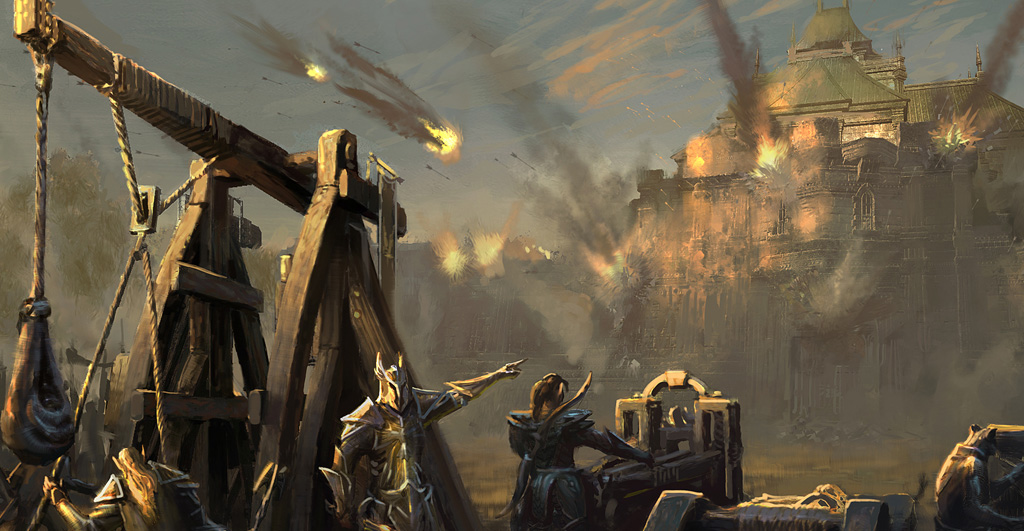 Grabrac is an Elder Scrolls Online media expert and professional writer. He is well known and respected in the Elder Scrolls community and his work is featured on TESOElite.com.
Subscribe
0 Comments
Inline Feedbacks
View all comments