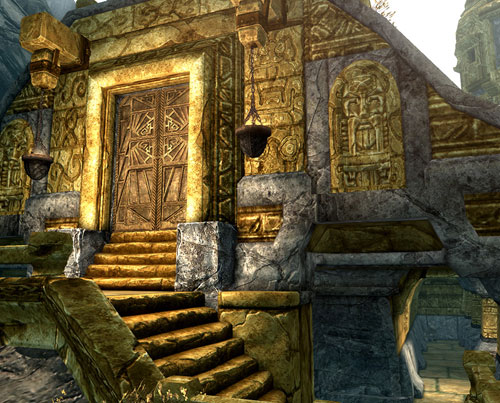 Dwemer ruins… steam whistles from the pipes along the ancient stone walls of this mysterious dwelling as you slyly make your way down the copper colored stairs. The steam seems to be powering the dim lights that guide your way through the first of many long halls inside these desperate ruins. The clanking noise in the background seems to be almost rhythmic and somewhat unsettling. It’s all very strange to you, who lived here and where have they gone? Symbols are carved into the sides of each doorway you pass through, but you’re not sure what they mean.

Making your way to a very large room you stumble upon what appears to be a gauntlet, it’s nothing like you’ve seen before. The design is much more square than traditional armor and the metal itself is new to you, it’s extremely strong and heavy. You wonder who could have worn this overburdening armor. You make your way through the other side of the room and begin to hear an additional clanking. Your curiosity is peaked and as you turn the corner a mechanical knight stands before you ready to protect these Dwemer ruins; an awe inspiring Dwemer Centurion.

Dwemer ruins have made a comeback in Skyrim. These beautiful ruins carved out of the sides of mountains contain many weapons, strange creatures and unsolved mysteries. As lore has it these ruins were at one time occupied by the Dwemer (Dwarven) people whom mysteriously disappeared some centuries ago. The Dwemer people dedicated their lives to the arts of science and engineering, utilizing steam as their main source of fuel. Their mechanical creations, still running off of steam, have been left behind to protect the ruins of their creators. Exploration of these ruins usually rewards the survivors with interesting new weapons and armor not to mention more clues as to what happened to the Dwemer people.

Dwemer ruins bring an exciting element to the province of Skyrim. It has been noted that one of the larger ruins has been converted into an actual city in-game in which allows players to see what a true Dwemer society could have looked like. Definitely keep a look out for these mysterious ruins as you explore Skyrim.