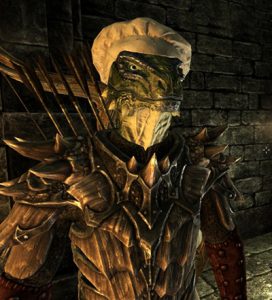 When you’re not out exploring the many caves and mountain tops Skyrim has to offer you can train your character in the art of a profession. This is the first time any game in The Elder Scrolls series has added professions to the players agenda. From being a blacksmith to an alchemist players can immerse themselves into the world that is Skyrim Professions.

Blacksmiths are a necessity in the world of Tamriel; warriors go off to battle and if they’re lucky enough to make it back they get to pay a blacksmith to fix their armor. If you plan on playing a heavy melee class, such as a warrior it would be wise to become an apprentice of the local blacksmith. Not only would this help with the cost of repairs but it would also allow you to makeB modificationsB to your already awesome weapons.

Who doesn’t need a log for building material or fire wood? Becoming a lumberjack in Skyrim is an eventful profession, from wading through the forests for the best tress to cutting them down and watching them fall all while you avoid the dragons. There’s never a dull moment when you’re a lumberjack.

Alchemy is the agent art of studying chemicals, essentially. In Skyrim creating potions is an extremely useful skill for those looking to host a couple assassinations. Alchemy allows for the creation of poisons, potions and enhancers. Potions are always nice to have around just in case you need a little extra boost of “confidence”.

Enchanting is nothing new in the world of Tamriel but there are rumors stating that it has been refined.B EnchantingB allows the player to “upgrade” their weapons with magical soul gems. Effects of these gems can be anything from health and magicka regeneration to poisoning and burdening. This is a very useful skill for those looking to take up melee combat but don’t want to play one of the stronger races.

Who doesn’t like to eat? Being a chef is an exciting new turn in The Elder Scrolls series, who would have ever thought after playing the past titles? Hunting rare animals and taking their meats to create mouth watery recipes couldn’t be more fun and on top of it you get to sell your creations. Food also helps players regenerate health on the go.

Which profession have you decided on?