One of the exciting things about Skyrim is the ability to cast magic spells, regardless of the type of character you play. Want to play a fighter or a thief? No worries — Skyrim magic is right at your fingertips. Unlike other RPGs, the ability to use magic isn’t limited by the class of your character build. This open-ended character system adds interest to the game, and really allows players to craft a unique character to their liking.

The rate at which Magicka is replenished can be increased by wearing special armor or apparel bearing the Fortify Magicka enchantment. These Skyrim magic items can either be found as treasure throughout the game, purchased from merchants, or crafted at an arcane enchanter. 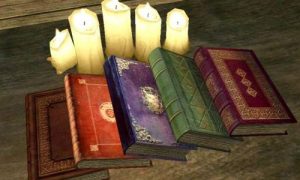 In Elder Scrolls IV: Oblivion, players had the ability to create their own magic spells. Spell creation is no longer possible in Skyrim however, and there are a set number of spells available to learn in the game (96 spells to be exact). Skyrim magic spells fall under one of the five schools:

In addition, every Skyrim magic spell has a specific difficulty level. You’ll need sufficient Magicka in order to cast higher level spells. The spell difficulty levels are as follows:

Spells can be learned by reading special books called Spell Tomes (purchased from merchants, mages, or found as treasure). More powerful, higher level Spell Tomes won’t be available for purchase until your character’s skill level is at or near the required difficulty level (for example, the Expert level spell Wall of Storms cannot be obtained until your character’s Destruction skill level is around 75). Skyrim’s system of learning spells helps keep the game balanced, and provides incentive for players to increase their character’s skills. Striving to improve your character in Skyrim’s open ended progression system makes the game challenging and addicting.

Please refer to the tables below for a definitive list of all Skyrim magic spells available in the game: