How To Get a Dog as a Skyrim Companion


The world of Skyrim is vast, and exploring this northern province of Tamriel can be a lonely business at times. Sure, you can fork over 500 gold and retain the services of several good hirelings (see our earlier article Help Wanted: Finding the Best Hirelings in Skyrim ), but why not forego a two-legged follower and get yourself a dog? Or better yet, get a hireling and a dog (yep, with a dog you can have two companions at the same time). Just like in the real world, a dog can truly be your very best friend.

Really, I Can Have a Dog?

In last week’s poll, we asked readers if they ever had a dog as a Skyrim companion. Surprisingly, 42% of poll takers didn’t even know that you could have a dog in the game. Part of the confusion might stem from the fact that there are several dogs in Skyrim that cannot become followers (take the dog in Riverwood for example — he’ll bark for you pretty as you please, but there’s not a chance in Oblivion that he’ll follow you anywhere). In fact dogs are the only animals that can become followers, and there are only a few such faithful hounds in all of Skyrim.

Where to Find a Dog

If you’re looking for a dog as a Skyrim companion, you have your choice of a few four-legged friends. These loyal dogs will fight by your side and obey your commands, but they cannot carry your burdens. 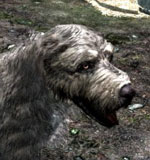 Vigilance is a war dog for sale at the stables in Markarth. Actually, he’s the only dog you have to pay for and costs a full 500 gold. Speak with Banning, usually found outside the Markarth Stables tending to the horses. He’ll sing the praises of Vigilance and dogs in general and offer to sell him to you for the right price. 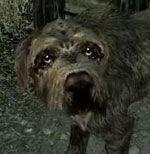 Meeko is a dog you find roaming near Meeko’s Shack in the wilderness in Hjaalmarch. This small building, east of Dragon Bridge and south of Solitude Sawmill is abandoned save a Nord corpse, his final words, and Meeko, the dog he left behind. Once you find Meeko he’ll lead you to his master’s body, and the poor heartbroken pup will want to journey with you! 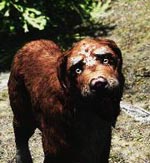 By chance, you may come across a Stray Dog as a random encounter across Skyrim’s endless wilderness. These poor guys are usually fighting off wolves that view them as competition or dinner. If you defend man’s best friend from his estranged brothers, or sometimes even nastier things that roam the wilds, the dog will take a liking to you and if you’re willing, tag along. 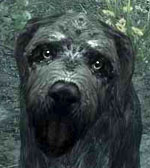 Barbas is the conscience of Clavicus Vile, devil of deals and Daedric Prince. If you head to Falkreath after you hit level ten you’ll hear rumor of a talking dog bother travellers. Talk to the town’s blacksmith Lod, then head out and Barbas will show up to ask a favor. To keep Barbas around you have to agree to help, but then never actually do it. He’ll continue to follow you and as an essential character and Daedric avatar, will never die. This can be useful, but since Barbas is a creature and not a normal NPC he won’t ever sneak which can make playing a thief a hassle.

Advantages and Disadvantages of Pet Ownership

A dog is basically just the same as any other adventuring companion you can find with two major exceptions: they don’t wield steel or cast spells, and you can have one in addition to a regular follower. What this means is that dogs are worse, but since they don’t take up a follower slot there’s no reason not to have one if you want one. But the adventuring lifestyle isn’t a great one for your fluffy friends, unless you’re talking about the werewolf friends you unlock in the Companions questline. They have very low health, and a habit of getting in the way of your attacks and running up to enemies that are much stronger than they are. So instead you might want to consider leaving them home at one of your character’s houses. They’ll stay there, warm and loved, and after three days won’t want to go back out again.

So how about it? Have you ever had a dog as a Skyrim companion? Let us know your thoughts on Skyrim dogs and share your experiences. Also, be sure to check out our Skyrim wallpaper section for awesome HD wallpaper for your PC and electronic devices. Until next time. Keep your eyes to the sky, fellow travelers!

Shane Scarbrough is the founder of the Skyrim Fansite. He's a business owner, video game journalist, and role playing game aficionado. When he’s not working he enjoys reading, writing, and playing video games. He's currently on his third playthrough of Skyrim, and is playing as a Templar in The Elder Scrolls Online. You can find Shane on Google+ and FaceBook.
Subscribe
11 Comments
Most Voted
Newest Oldest
Inline Feedbacks
View all comments

but as a vampire lord you can get a death hound

I want to have a husky but can’t find any and all my friends keep joking at me bc I cant find one.

Didnt know that. But i guess it wouldnt really suit for a Khajit to have a dog as a follower (for obvious reasons). :/

LOL! I haven’t played the Khajiit yet, but when I do I’m definitely getting a dog.

Did anyone say you couldn’t have a dog follower as a Khajiit? No.

I’m a two-handed user I aways hit Bandits
And hit my dog cuz he is in the way.
I’ve killed two stay dogs
I’ve killed Meeko 😔

I’ma have Barbados fight Alduin and Mirrak with me if I can.