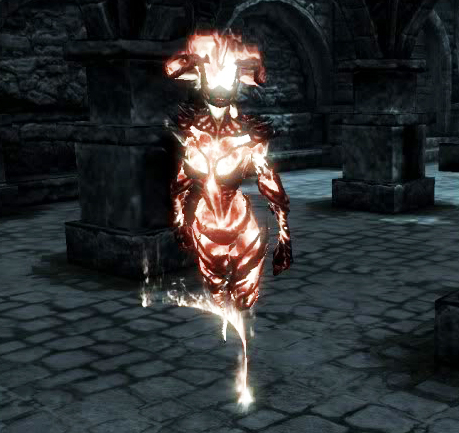 Do you enjoy being able to have multiple followers? Do you enjoy the prospect of easy money early on in the game? Do you like zombies? Conjuration is the school of magic that couples all of these ideas under one umbrella.

Starting Out
There are two races which give skill bonuses to Conjuration: the Breton (+10 bonus) and the Altmer (+5 bonus). Bretons also start out with the spell Conjure Familiar.

Leveling conjuration early on is slow, but try to summon your familiar/atronach whenever you can. An easy way to level conjuration would be just to keep dual-casting Bound Sword. If you’re looking to level a weapon-based skill in addition to conjuration, summon your familiar and attack it with your weapon. A word of warning goes out to killing elemental atronachs, however. They explode into a cloud of their specific element when they die.

To be efficient, my recommendation would be to go through various dungeons and do quests. By taking your time leveling it up, you’ll also be making money while going through various quests.

Money
To make easy money early on, make sure you have soul trap with you. Buy empty soul gems and fill them with soul trap by hunting lower level enemies like wolves, mudcrabs, salmon, deer, foxes, rabbits, etc. Smith yourself iron daggers and enchant them with the soul gems you filled and sell them. With this method, you are making money while you level smithing, enchanting, and conjuration.

Phinis Gestor is someone you will be frequently visiting the more you immerse yourself in Conjuration. Located at the College of Winterhold, he will train you in Conjuration up to the expert level. He will also sell almost all of the Conjuration spells as well as sell you robes enchanted for Conjuration.

Types of Summons
Familiar. The familiar is a spectral wolf that attacks at melee range. It is the beginner level summon and is tanks most damage well early on. The upgraded version is the Flaming Familiar that runs towards enemies and explodes, similar to Fireball.

Flame Atronach. She is the second summon that players will be able to get. She is resistant to fire, disease, and poison, but weak against ice spells. Her ranged attacks will set an enemy on fire while her melee ranged attacks are nothing special. When she dies, she will explode into a cloud of fire, damaging everything in range. However, if she times out, she simply disappears. Her permanent version is a Flame Thrall.

Frost Atronach. He is resistant to ice, disease, and poison, but weak against fire spells. Again, when he dies, he explodes into a frost cloud, damaging everything in range. He will simply disappear if he times out. His permanent version is a Frost Thrall.

Storm Atronach. He is resistant to disease and point and currently has no known elemental weakness. His attacks resemble Lightning Bolt. When he dies, he explodes into a storm cloud, damaging everything in range. His permanent version is a Storm Thrall.

Zombies. There are various spells involved with raising dead bodies. When a zombie is raised, they have the same abilities as what they had when they were alive. When they die or time out, they turn into a pile of ash that have the same items as they did when they died initially. The Dead Thrall will reanimate a body permanently and when it dies, it does not turn into ash. Thus, you can reanimate the same body multiple times.

Dremora Lord. Humanoid creatures from Oblivion, they wield great swords that will set an enemy on fire with attacks. They are able to sense when enemies are nearby and will rush to kill anything that opposes their lord. They have no ranged attack. There are no permanent forms for the Dremora Lord.

Bound Weapons. The only three types of summoned weapons are the sword, battle axe, and bow. Using any of them will level up their respective weapon skill. The damage output of the weapon is affected by the level of its respective weapon skill. For example, the damage output of a bound sword increases with a higher level of one-handed weapons. You’re able to dual wield bound swords. Bound bows also spawn 100 bound arrows.

Master Level
When you hit level 90 in Conjuration, to unlock the master level spells, you will need to talk to Phinis Gestor and do his ritual quest. He will give you the spell Summon Unbound Dremora in which you will need to go to the magic circle on the roof of the Hall of Attainment, summon the unbound dremora and demand him to get you the sigil stone you need. If he refuses, punish him with death. Keep summoning him and killing him if he continues to refuse your order. When he gets you the stone, return to Phinis. After he appraises it, he will return it to you and he will now sell skill tomes for master level conjuration spells. You are also able to use the atronach forge in the Midden below the college.

My Opinions
Early on, Conjuration is not strong on its own. It works best combined with other fighting styles. For example, if you are focused on destruction magic, atronachs are useful for tanking damage. During my time int he Dark Brotherhood, Bound Bow was something I relied on for my assassinations. That and I was too cheap to buy a bow or the materials to make a good one.

My style involves summoning 2 Dremora Lords far ahead of me to catch possible aggro while I run around to loot everything. I will go as far as to say that the Dremora Lord is the strongest summon in game. If it were possible to summon them permanently like the thralls, that’d be incredibly OP.

When fighting dragons, I never use Thralls. Usually, they die halfway through battle and they cost too much time and magicka to cast in the middle of a battle.

I never use zombies, so I cannot provide any input on the usage of zombies. I find Dremora Lords to be more fun to use. They yell and scream at enemies in the name of their lord, which I happen to enjoy.

The first skill I maxed was Conjuration and I maxed it by hunting for those soul gems. My Breton is still my main character for going through the game. I’ll never stop using Conjuration magic. Dremora Lords make everything easy.

I hope all of this has helped in some way. Happy Skyrim.

Phill is a long time Elder Scrolls enthusiast who decided to create a community of his own. He is the founder of both The Skyrim Guild and The Shadowed Mare -- two of the earliest Skyrim and Elder Scrolls Online websites.
Subscribe
1 Comment
Most Voted
Newest Oldest
Inline Feedbacks
View all comments

Mage can do everything, conjuration for warrior, destruction for mage, and illusion for thief.