The fans have spoken, and both Valve and Bethesda have heard the message loud and clear. In a complete turnaround, Valve just announced that they’re removing the payment feature from the Skyrim workshop (to better understand the modding/payment controversy, please read our earlier Skyrim Fansite article, Paid Mods In Skyrim: Is This The End Of Modding As We Know It?).

You can find this evening’s announcement here, but we’ve printed Valve’s statement in its entirety below:

Removing Payment Feature From Skyrim Workshop
We’re going to remove the payment feature from the Skyrim workshop. For anyone who spent money on a mod, we’ll be refunding you the complete amount. We talked to the team at Bethesda and they agree.

We’ve done this because it’s clear we didn’t understand exactly what we were doing. We’ve been shipping many features over the years aimed at allowing community creators to receive a share of the rewards, and in the past, they’ve been received well. It’s obvious now that this case is different.

To help you understand why we thought this was a good idea, our main goals were to allow mod makers the opportunity to work on their mods full time if they wanted to, and to encourage developers to provide better support to their mod communities. We thought this would result in better mods for everyone, both free & paid. We wanted more great mods becoming great products, like Dota, Counter-strike, DayZ, and Killing Floor, and we wanted that to happen organically for any mod maker who wanted to take a shot at it.

But we underestimated the differences between our previously successful revenue sharing models, and the addition of paid mods to Skyrim’s workshop. We understand our own game’s communities pretty well, but stepping into an established, years old modding community in Skyrim was probably not the right place to start iterating. We think this made us miss the mark pretty badly, even though we believe there’s a useful feature somewhere here.

Now that you’ve backed a dump truck of feedback onto our inboxes, we’ll be chewing through that, but if you have any further thoughts let us know.

Bethesda mirrored Valve’s sentiments, and this is what they had to say on BethBlog.com:

After discussion with Valve, and listening to our community, paid mods are being removed from Steam Workshop. Even though we had the best intentions, the feedback has been clear – this is not a feature you want. Your support means everything to us, and we hear you.

This is a total victory for gamers adamant against the idea of paid mods in video games and  Skyrim in particular. Cyand Wondel, the person behind the change.org petition, posted this message shortly after this evening’s surprise about-face: 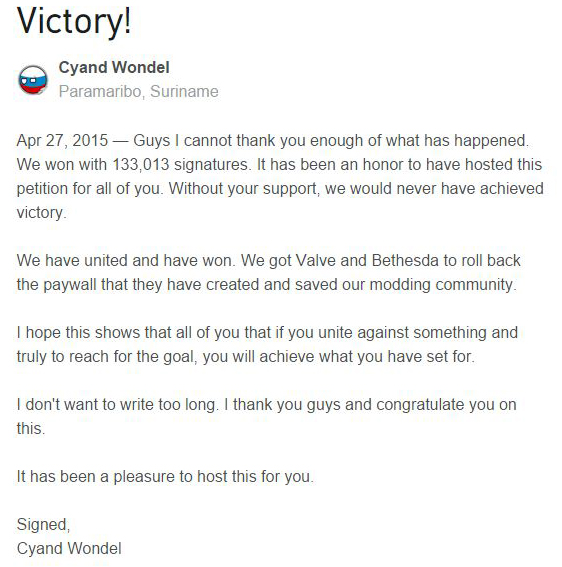 Our Take On The Situation

It’s not often that big business listens to its fan base, and the Valve decision to deep-six the payment program is a testament to the caliber of both Valve and Bethesda. Both companies should be applauded for tonight’s decision to remove the paid mods from Skyrim. Modding can now go back to being an activity pursued solely for the sake of artistic expression without the taint of money.