Imagination. The aspect of human consciousness that truly separates us from any other species on this planet. Our ability to create worlds, invent characters and tell stories are the building blocks of what has led to some of society’s greatest discoveries. To our complex philosophy, society, science, and belief. And yet, imagination is ignorance. It’s seeing the world through the eyes of a child who doesn’t understand the complexities of existence but can make an empty room into a spaceship, pretend a stick is a sword and have hours of fun sitting in a box. It’s seeing the world with an ethereal sheen as anything awaits on the horizon and anything remains possible. Rakuen an rpg maker game by composer Laura Shigihara, is a game about both of these things. About the complexities of human emotion through the lens of a bed time story. In a year that seems set to show the world that video game narratives are to be taken seriously, Rakuen with all it’s childlike veneer may be one of the most important stories you experience this year.

As I write this review, my eyes still red from tears after an ending that hit me like an emotional gut punch, the word that actually springs to mind when thinking back on my adventure is whimsy.

Rakuen’s tale follows a young boy, hospitalised for unspecified reasons. Taking control you explore his hospital ward, befriending and getting to know each of the fellow patients around him. However, from the outset you get the impression there is more to the world and sure enough it comes in the form of a magical bed time story the Rakuen. The boy’s bedtime story as his mother tells him is no ordinary tale, the Rakuen is a world hidden behind doors in our own. Thus the boy and his mother enter the world of Morizora’s forest to ask the forest king to grant him a wish just like in the story.

Through this adventure you’ll meet snooty, tea loving flower buds in the sky, cats that aren’t cats, a freeloading onion who just wants to play card games all day and a few characters who are curiously similar to the ones on your real world hospital ward. The ideas and themes that Rakuen tackles are often dark and painfully uncomfortable at times dealing with regret, illness, loneliness and facing the inevitability of life. Yet the game never looses its sense of joy in the process, the game understands that like in life through even the darkest of times we keep finding reasons to dream and to smile. Despite being a game that brought me to tears multiple times looking back on my time spent with Rakuen already brings a smile to my face. 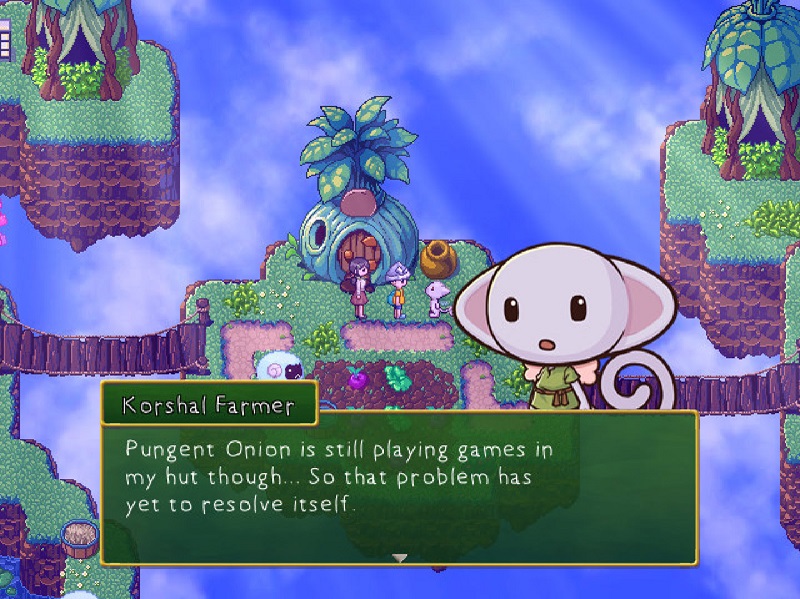 The world of Rakuen is just so well realised and every frame of both the fantasy world of Morizora’s forest and the hospital ward oozes personality. Almost everyone (and in many cases ‘everything’) have something either funny or meaningful to say and entering any new area always came with the guarantee of meeting a delightful new face. There’s also so many little details that just add even more to the games personality, like the character Sue, a young girl who sees whole worlds in the marbles she collects, finding her lost marbles and bringing them to her will reward you with a description of some fascinatingly imaginative world (my personal favourite is pillow fort world) which never failed to bring a big stupid grin to my face. 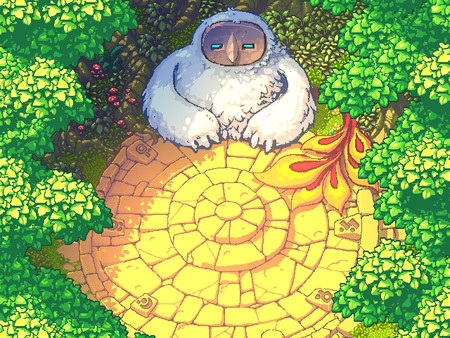 Even unnamed side characters have some sort of quirk or funny quip that makes them likeable, like the shift leader and her obsession with peanut chew chew’s or the sunflower and his rock band NO HOLDS BARD! Who regularly bust out into a metal guitar solo whenever interacted with.

Luckily the art style and graphics that bring all these characters and places to life are top quality. Of course this is an rpg maker game, so its all 32 bit graphics and pixelated environments. But as countless other similar games like To The Moon have proven great art can outshine technical limitations tenfold. (take a shot every time I mention To The Moon) 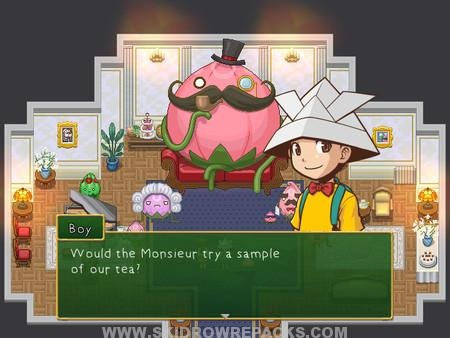 Rakuen’s environments are crammed with little graphical details and brilliant use of lighting that makes each one come to life. Leaves dance in the wind as you traverse the villages of Morizora’s forest. The lighting is oppressive and stilted in the abandoned parts of the hospital. Stars litter the skies in night-time environments and the variety of unique character models is plentiful.

The character portraits during dialogue are expressive and convey a large range of emotions, from wide-eyed excitement to sadness and shock. The unique designs are also charming such as the Leeble villagers, the flower buds and all the unique incarnations of the patients from the hospital ward. Rakuen is a beautiful game at time and its use of cinematic angles and top-notch sprite work really do shine. It’s a testament to how inventive design and love really outshine technical prowess. The one big negative unfortunately is the resolution. It’s unfortunately locked at 640×480 and the game has no option to change it, so you’ll be playing the entire game with black bars at either side of the screen or manually changing your screen resolution. 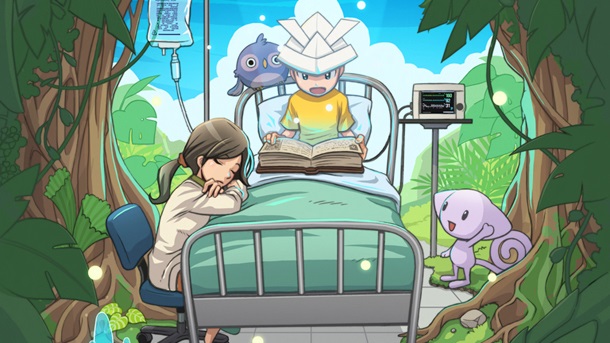 Gameplay wise Rakuen is most easily compared to another rpg maker game To The Moon. (Drink) There isn’t any sort of fighting or battle mechanics and in areas like dungeons and other similar areas character take the place of traditional enemies. (seriously I haven’t seen a cave as lively as the one in Rakuen) elsewhere the gameplay is mostly made up of puzzles, often involving flicking switches and moving boxes. It’s all fairly basic stuff though it works in the context of the games world and to its credit the game does mix it up on a few occasions. Such as becoming a waiter at a tea party and the multiple flashback scenes you’ll partake in.

Rakuen’s gameplay really isn’t anything complex or new and in this case that’s actually a good thing. Rakuen is a video game bedtime story, it’s the kind of game you get a blanket and a cup of something hot for and just escape the world for a few hours at a time in. It’s a rare instance where any sort of combat system would have ruined the presentation here and Rakuen’s gameplay only has a few minor hiccups that in the end don’t really effect the experience overall. The way the world is broken up and segmented also gave me fond memories of classic adventure games. When you start most of the paths out of the main village are blocked by rocks, water and bamboo shoots. To progress you’ll need the tools to cut and smash your way past, and to get said tools you’ll need the materials for the blacksmith to make them. None of this is remotely difficult or all that inventive but it manages to be just the right amount of progression to nail that classic feeling, when you finally make it past that curious cave or flooded area.

Rakuen is also weirdly good value for money, something I didn’t really ever expect to be a point in my review but its a surprisingly lengthy adventure. Priced at just £6.99 ($9.99) the same price as To The Moon I expected a similar length of around 2 to 3 hours. Instead I got a game that actually took a few sit downs to finish with my steam play time ending at about 8 hours. That’s longer than most triple A games these days and at £6.99 is unbelievably generous.

Talking about the soundtrack from a game created by a composer seems like almost a null point but it bears repeating that Rakuen’s is a great one. The soundtrack isn’t just a good collection of songs but actually an integral part of the games narrative, as many characters sing throughout the adventure. My personal favourite is Jump, a beautiful swan song that plays during the games final credits but there are many other great and varied songs that play throughout the adventure. An odd thing to mention but I’d keep it noted is that these are very nursery rhyme-like songs, just preparing you for the time you will be sat at your laptop or computer listening to a bear sing a bedtime story to his cub. While I don’t know if it quite beats out To The Moon or Nier for favourite soundtracks, those two do have years of nostalgia over this one. Either way the music here is exactly what you would expect from the composer of Everything’s Alright (you know the song that made you cry like a baby during that one scene in To The Moon….. don’t deny it. We all did.) 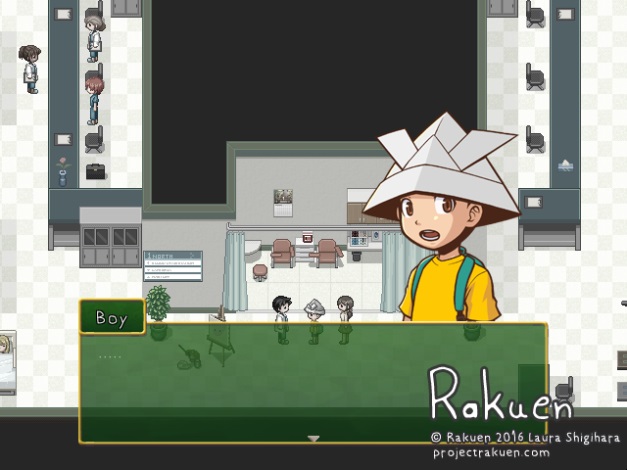 Don’t let Rakuen pass you by. I cannot implore enough how important this little rpg maker story truly is. In a time where video game narratives like Nier Automata take a look at the video game medium and use it to say powerful things about life itself or how my last reviewed game the Last Guardian showing big budget games can still have heart. Rakuen comes back to remind us just how important imagination is, to remind us of the power of human connection and to remind us just what its like to see the world through a child’s eyes, to conquer the worst adversity with a smile and a cheer. Rakuen says so much and hit me with so many powerful emotions and yet by the end it just reminded me to keep looking up.

I feel blessed to have spent the last week meeting and getting to know both Rakuen’s world and its characters and like any good children’s bed time story I feel comforted by the experience as a whole.

His favorite games are no hall of fame classics. Lover of the bizarre and weird, cult classics and anything Japanese are his bread and butter. He'd sooner have another game from Yoko Taro, than Halo or Uncharted. He believes in the immense potential for video games and the stories they can tell.
Subscribe
0 Comments
Inline Feedbacks
View all comments