Can Peer Pressure be Positive? 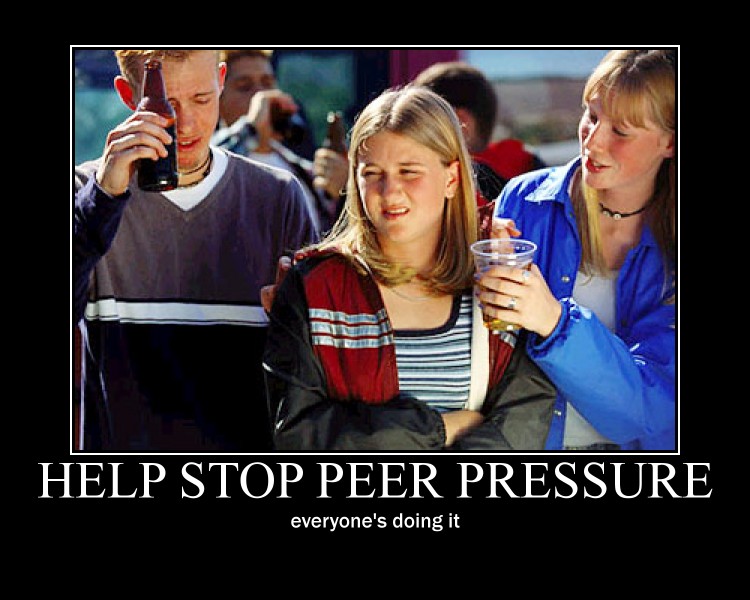 Today’s pressure related topic for NaBloPoMo is about whether peer pressure can be positive, and once more I refer to the Wikipedia definition .

“Peer pressure is influence that a peer group, observers or individual exerts that encourages others to change their attitudes, values, or behaviours to conform the group norms.”

So yeah, by that definition peer pressure can be positive providing that the group norm itself is also positive.

A group norm must be compared with a social norm for anyone to make the distinction between right and wrong, and a course of action be decided. Not in every case of course, you’ve got that whole survival instinct and just plain common sense playing a factor in some decisions, but in many cases we look out to the wider area of social norms for guidance in our group norms.

For example, and I realise I’m going back to that old smoking chestnut again.

Smoking is now much less acceptable than it was a decade or so ago. You’re a smoker who’s just left a restaurant, and you’re standing outside with a group of friends who don’t smoke. Peer pressure would come into play, and unless you reeeeeeeeally needed a cigarette you could be peer pressured into not lighting up there and then. So there you have an example of positive peer pressure.

But is it all that positive?

From a health perspective, not having that cigarette is likely a positive thing, but you could argue that the smoker would likely be irritated for feeling like he wasn’t allowed to smoke, there could be an amount of physical discomfort and the relationship with those friends may suffer a bit because of that peer pressure. So although it wasn’t intended, there would be negative consequences from that, probably well-meant peer pressure. So is this positive or negative peer pressure?

Checking this example with the definition of peer pressure, the social norm leaned towards not smoking, the group norm was clearly leaning towards not smoking so using peer pressure to stop someone smoking is positive, but the short-term outcome for the smoker was more negative. Plus, in truth the positive effect itself would likely be negated by the next cigarette the smoker had anyway.

Though surely we must go by what was intended by the peer pressurers rather than the outcome itself.

Another thought is that those non-smokers were likely motivated by their own wants and needs, they may not have liked the smell or the concept of breathing in the smoke themselves. So they may not have thought in regards to positive actions for the smoker. Though, that isn’t against the definition of peer pressure admittedly. After all, how many decisions we make aren’t selfishly motivated at least a bit?

Through all the above brain-drain waffle, and definitions, I’m struggling to think of an example of positive peer pressure. It’s not entirely confusing why. We, as squishy flesh-bags (sorry I mean human beings) build up our social and group norms around us, that are to support a better life or society for ourselves.

Positive peer pressure must exist, as all it needs would be someone going against a negative group and social norm to do something positive. What cannot be defined in this context is ‘positive’ and ‘negative’. Do we look at the short-term or long-term effects of the peer pressure, or the intended outcome? What about environment, religion, culture, the person’s age, height, weight? These all play a factor in determining what positive and negative actually mean in each individual case.

As I thought about an example of positive peer pressure, my brain started to make a weird kind of rusty squeaking noise, and I could smell the feint aroma of burnt pork and had to stop. So here lies the longest and most convoluted way to say ‘I dunno’.

What are your thoughts on positive peer pressure? Do you think it can exist, and more importantly can you think of an example?

Jim Franklin is a freelance writer, living in Derby UK with his wife and his player 3. When time allows he likes nothing more than losing himself in a multi-hour gaming session. He likes most games and will play anything but prefers MMO's, and sandbox RPG's.
Subscribe
3 Comments
Most Voted
Newest Oldest
Inline Feedbacks
View all comments

Hmmm…. I don’t know. I’m sure positive peer pressure exists. Maybe… all your friends have read The Book Thief and when you get together, they all talk about it, so you decide to read it so you can join in with them, and then discover it’s your favourite book of all time?

The thing is, no individual action is entirely positive or entirely negative. Think of the most negative, terrible, disgusting action possible and, if you look at it from the right perspective (likely, the perpetrator’s), there will be a positive to the action. Even if it’s only “It made me feel good for half an hour”. So using arbitrary words to define peer pressure as good or bad, positive or negative, only works if you then choose your judgement perspective.

I actually don’t really notice peer pressure these days, positive or negative. At least, not when it comes to me. I’m too busy doing what I believe is right to pay much attention to anyone else’s view of it in anything other than a vaguely exasperated “What do you mean you don’t understand??” kind of way.

You make a good point. Peer pressure to watch Firefly / Serenity definitely worked out for the best.

As you say there are always good and points. Look at Hitler. Take away the genocidal, megalomania and he did pull Germany out of the pits from World War 1.

I’m not sure I notice peer pressure now. Too busy trying to stand out and be contrary. Your version’s better… 🙂

Peer pressure to watch Firefly is always a good thing. 🙂