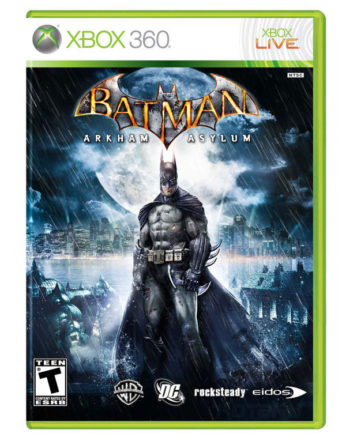 This weekend, I managed to catch-up with the rest of the gaming population and bought Rocksteady Studios’ ‘Batman: Arkham Asylum’ for my xBox 360. A mate recommended it to me and after seeing it as a Platinum Hit for a tenner, it pretty much sold the deal. A few hours later and I’m writing this review.

Batman: Arkham Asylum, as expected puts you in the boots of your favourite chiropteran-based hero as you battle the denizens of the now Joker owned Arkham Asylum using your combat and stealth skills to stay alive. Plus because this game is based on the comic books and not the new films you don’t have to listen to Christian Bales absurdly silly deep voice, but instead Kevin Conroy and Mark Hamill as Batman and the Joker respectively.

Giving you a bit more of the story. After attempting to blow up the Mayor’s office the Joker hands himself over to the police and ultimately ends up being given an all expenses holiday in Arkham Asylum. Not too long after this, the Joker escapes from his handlers (and you) and with the help of Harley Quinn and other members of his gang (who were conveniently moved here after their last asylum caught fire) they take over the asylum and capture Commissioner Gordon. After this point, trying not to spoil the story too much, the full scope of the Jokers plan is revealed and Batman has to use all of his skills to save the various innocent people of Arkham as well as foiling the Jokers plan. As well as the Joker more of the Batman’s nemeses turn up to the party including Scarecrow, Bane, and Doc Croc who all, for some unfathomable reason, tend to want to kill Batman.

The action is simple and effective using only three buttons. Attack, Counter and Stun, although items such as batarangs, explosives and grappling irons can also be used once found. When an enemy is about to attack, a flash appears above their head at which point you counter, and then attack until another henchmen (these guys rarely if ever show up alone) goes to attack and a simple counter will see you fending them off too. A few enemies block when attacked normally, so need to be stunned first. So as you fight 5+ enemies at once by keeping an eye on the mobs, you find yourself taking part in a fantastically fluid ballet of attacks and counter-moves, with each move you do varying on the type of attack and mob it’s against. It’s nice to think that something so simple can produce such eye-catching results.

Of course it’s not too far into the game when your enemies start carrying guns and sniper rifles, which is not only rather unfair of them, but their willingness to use them can lead to some rather unfortunate injury and death related incidents. This is when your stealth skills come in rather handy.

As well as the normal view, you also have something called Detective view. By enabling this you see any objects that can be interacted with, as well as any people (coloured blue, for unconscious, dead, unarmed friendly, and red for armed). People can be viewed through walls, so it allows you to stalk and watch people from relative safety providing you remain hidden. This view can be used to use items to your advantage, such as gargoyles and high platforms for hiding from enemies, or to discover grates that can be entered to surprise your enemies or find secret areas.

Once you have enough practice, you can stay hidden and pick people off silently (in a Metal Gear Solid type of way). Of course Joker who seems to have access to every TV screen and radio in Arkham will not stand by and let you get away with this without saying something. He’ll announce to his henchmen over the overhead speakers things such as “Have you done a head count recently, are you sure you’re not missing anyone?” or even more specific things such as “I spy a bat on the gantry, you all best have a look” at which point the henchman will follow the Jokers command.

As you take on thugs and solve puzzles, you are awarded with experience points. It is with these points that you can buy upgrades to Batman’s gear and skills. These upgrades include things such as improving your armour, adding new skills, or improving your use of batarangs or explosives.

Littered through the game are further embellishments to the game which, as you play give you not only with more experience but also with more information or give you more challenges. For example, interview tapes are scattered throughout the asylum allowing you to listen to psychiatric evaluation interviews taken with all the villains. There are also, various achievements or riddles set by The Riddler, some are as simple as investigating certain images, while others are finding hidden question marks through the level of even destroying ‘joke chattering teeth’ with batarangs.

The graphics are nice and offer a very well designed atmosphere. Asylums are usually good fodder for horror games and films but they are scarcely used outside of them. Rocksteady Studios have created something taken straight from the pages of the comics and given it enough chill to make sure it doesn’t sit entirely easy with the audience but also have not thrown so much gusto at it that you’re drowned in a sea of overdone clichés.

The storyline scenes add to this effect. The first scene as you are bringing the Joker to the Asylum, probably because it seems to go on forever, gives the Asylum a vast and distinctly cold feel. Other bits of storyline are introduced by way of Batman’s portable radio device, so you can listen to the story and still move. Which to me is important. Games with too many cut-scenes which you can do nothing but watch, are often skipped after the first time because you generally don’t buy a game to sit back and do nothing.

If you get bored with the storyline, which I can’t personally see as being likely but it is possible, then there is another mode for you called the Challenge Mode. As you progress through the game, you will unlock the various games within Challenge Mode. These are small segments based on previous game sections.

For example, the first challenge sees you faced with wave upon wave of thugs and you have to dispatch them and gain as many points as possible. Whilst a challenge unlocked further into the game puts you in a room where you have to disable all the armed guards via stealth in as little time as possible. A nice idea indeed. If there’s a particular thing you like about the game, or just need more practice in it, then the Challenge Mode provides you with the perfect opportunity to improve or use those skills.

Downsides? Well, there aren’t many but certainly on the xBox 360, saving is performed by way of crossing checkpoints. There’s no ability for you to save when you want. So without knowing where the next checkpoint is, I often have to just quit and hope that when I play next time, I’m not too far back. This is a minor gripe, and as far as I can see is the only thing I’d change.

Right, so in conclusion what you have here is a graphically eerie and yet stunning comic-book based action rpg, that has the combat simplicity and effectiveness of Streets of Rage II, and the tactically breath-taking stealth kills of the Metal Gear Solid games all wrapped up in a deliciously designed package. The storyline is well paced, and I spent nearly the entire weekend playing it owing to the fact that once I’d passed a checkpoint I couldn’t bring myself to turn off my system; I needed more stealthy/attack action. It was like a drug by the end of the weekend.

Want to know even more good news? Well, they’re currently making a sequel called ‘Batman:ArkhamCity’ which will include Penguin, Catwoman and Two-face.

Until then though, If you haven’t gone out and spent just £10 pounds on this masterpiece then you really should…. Right now, I mean. Go on, off you go…