What Can We Expect from Minecraft Dungeons?

Be it movies, novels, TV shows, or games – we have learned to be skeptical of sequels that feed on their giant predecessors’ success. Many of those “part-2’s” either can’t live up to the expectations of the fans, step into a new territory that doesn’t match the tone of the original, or simply fade off into the ungratifying territory of fanservice.

We did have a few surprisingly good sequels to our favorite classics this year (DOOM Eternal, Half-Life: Alyx, and Mount & Blade II: Bannerlord among them), but what can we expect from an upcoming Minecraft isometric dungeon crawler RPG, Minecraft Dungeons? How did the game’s developers handle expectations of a passionate (and very much active) fanbase of a 2009 title that since then has become synonymous with the genre of sandbox itself?

Re-imagining of Minecraft: Boon or a Curse?

Let’s get this out of the way first – treating Minecraft Dungeons as a “sequel” won’t do it much justice.

In fact, reassembling Minecraft as a hack-and-slash dungeon crawler is actually a kind of an anti-sequel to its signature sandbox experience.

From what we can gather, Minecraft Dungeons comes with a detailed story, story-based exposition of the lore, concrete leveling system, and pre-assembled event locations. All of this is simply lacking in the “vanilla” Minecraft experience comprised of fully alterable landscape with only a handful of procedural generation rules for biomes and locations. No limitless crafting, no landscape mining, no building.

We know that Minecraft‘s setting worked very well in the sandbox genre, but without the elements that made it so addictive what can it offer to the heavily saturated RPG genre?

On top of all this, how can we be sure that Mojang can create a better experience than the endless array of fan-created Minecraft RPG mods and maps available out there, catering to any desire and taste? Can it match the settings and stories so enthusiastically assembled from the players’ deepest insights into the original game? We’ve learned some of these lessons from the mixed reception of Telltale Games’ Minecraft: Story Mode. 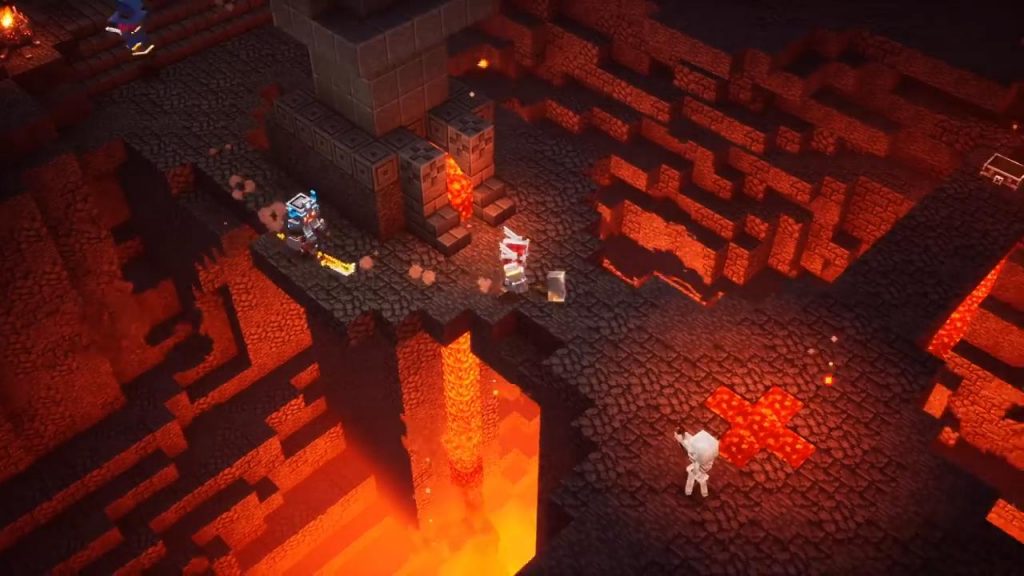 Well, the good news are – we don’t have to sit around and keep guessing! (Despite the recent delay to the release date.)

The official gameplay videos and beta versions offered by the developers give us a plenty of data for some first impressions, and what we have so far is very, very promising.

From the introductory cinematic, Minecraft Dungeons sets a high standard for the immersive atmosphere on a level above anything we have seen in Minecraft. The RPG tone is set by high-detailed textures of our familiar blocks (from grass, trees, and dirt to the beautiful transitions in between), now with an additional medieval-fantasy twist to them.

Our eyes immediately notice the high-quality shaders contrasted to the bright spots of light. The atmosphere quickly transitions from the beautifully detailed dusk-lit village of the tutorial to the glowing mushrooms and fireflies in the dark Creeper Woods, filled with dense overgrowth and leaves rustling in the shadows. 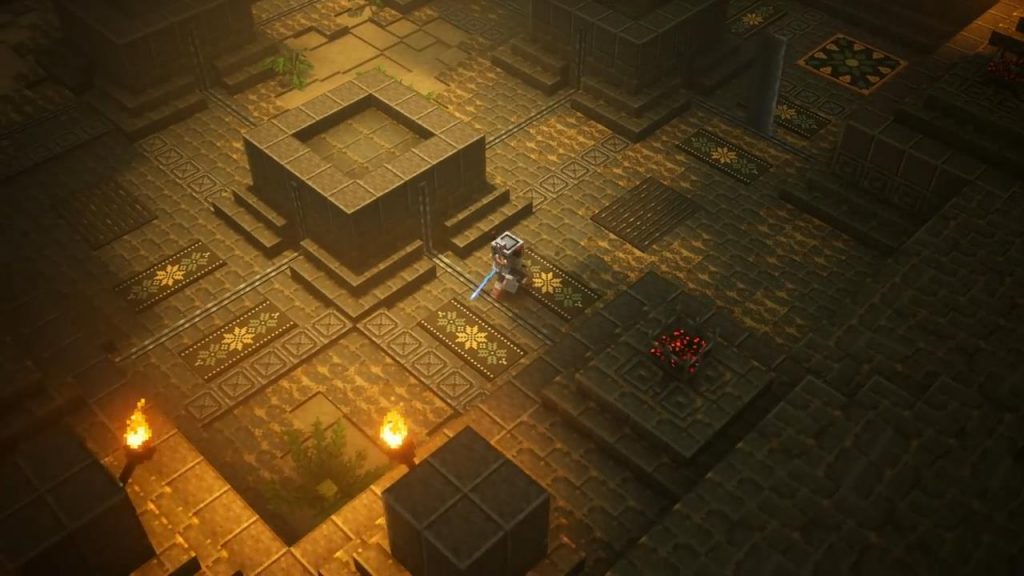 And yet, the remastered textures still look very familiar to the eye of a Minecraft player, coupled with the sound effects quickly picked up by the trained ear to create a distinct feeling of déjà vu. The developers also did an impressive job integrating Minecraft‘s enemies, and so the familiar faces of Vindicators, Skeletons, Zombies, Spiders, Creepers, (and even Chicken Jockeys!) and later Slimes, Evokers, and Endermen jump out of every corner.

(We won’t spoil any story here, but the game might be giving an interesting backstory to Illagers…)

Yet, while the monsters might look the same, you might note that some zombies come at you wearing a full suit of armor, and some skeletons carry spears, while spiders launch spiderwebs to immobilize you for a brief period of time… If that wasn’t enough, wizard Illagers, Enchanters, spawn hoards of enemies and enchant them with special abilities to challenge your skills and your equipment. On top of that, Geomancers trap you in cages of exploding pillars and Redstone Golems shake the ground beneath them (and breathe fireballs, if they are the Redstone Monstrosities). You will have to continue improving your character and your strategy to be able to face these new challenges!

Perhaps you can try throwing a TNT block at them? Bet you always wished you could do that in the sandbox game! 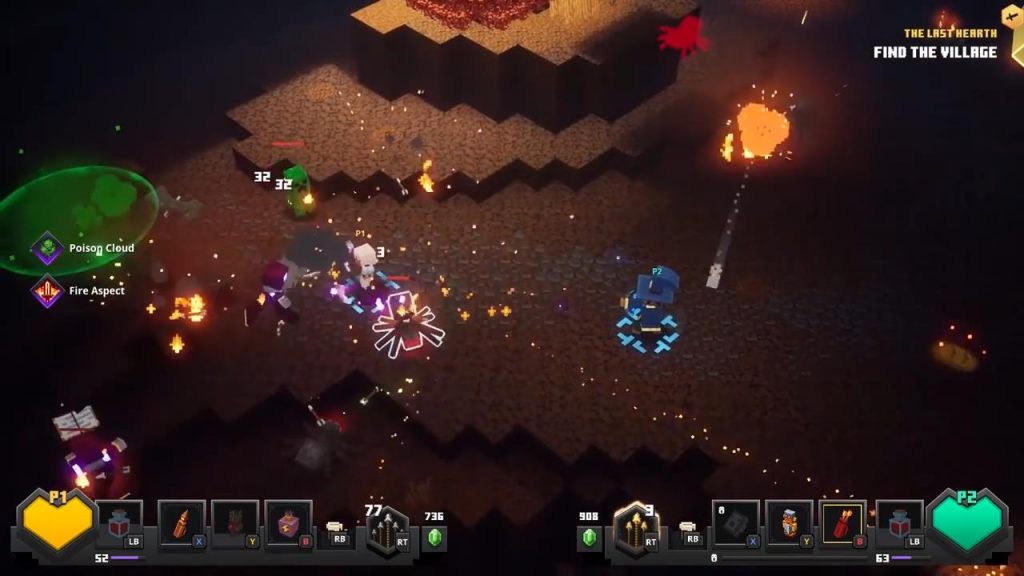 While being able to use a fishing rod is heartwarming in its own way, it isn’t the only feature that makes a delightful reappearance in the Minecraft Dungeons: the developers gave a hard spotlight to the Enchantments we remember from the old Minecraft.

In fact, the available variety and combined power of these enchantments might be the major factor powering the combat system’s high level of customization (quite appropriate for the game’s sandbox legacy). Since Minecraft Dungeons doesn’t feature any classes, the player’s experience is shaped by the melee weapon, bow, and armor they are carrying and each will eventually be able to take up to three unique enchantments.

Imagine leeching health, summoning thunder, shooting exploding or ricocheting arrows, or stunning, burning, or knocking back your opponents. When you level up you will get an Enchantment Point to invest into your gear, powering it with new enchantments you have assembled by picking up rarer equipment drops during your adventures.

As you improve your gear and your player camp you will be able to take on higher difficulties of the levels you have finished, getting better loot to further improve your character! 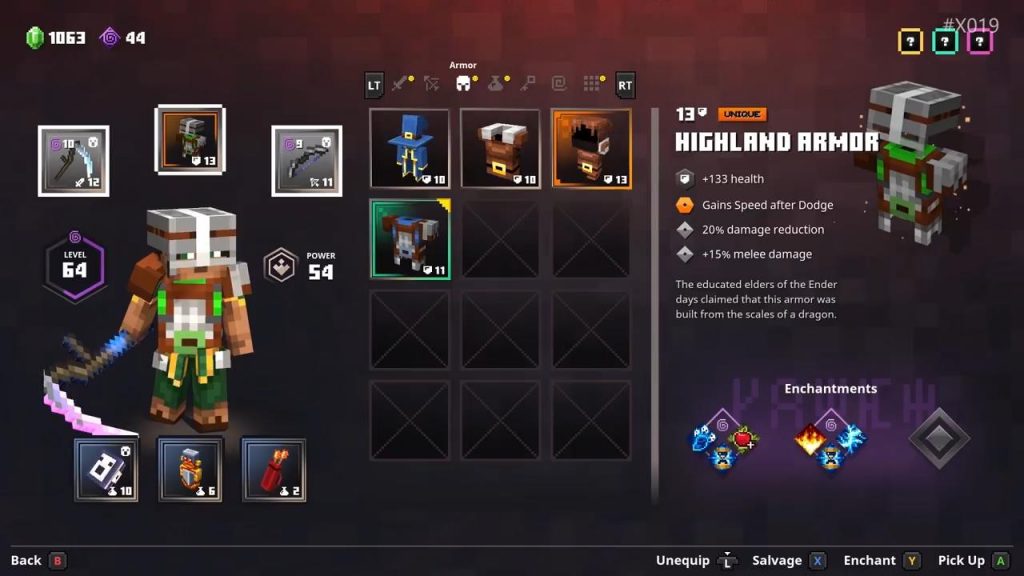 Finally, we have to discuss an important addition to the Minecraft Dungeons experience: the flexible multiplayer system.

If there is a feature that underlined Minecraft‘s exploding success, it would be its massive multiplayer servers. And, instead of making Minecraft Dungeons exclusively singleplayer, Mojang decided to develop on its sandbox game’s legacy by introducing easy drop-in multiplayer to honor the casual fun that the players remember having exploring and building upon the blocky world together.

As soon as new players join in, the difficulty of the level adjusts to keep things interesting, but the level also begins to offer better rewards per player to reward the cooperative approach. There is no friendly fire or fighting for the loot (potion drops being the exception), so that friends and strangers alike can enjoy experiencing the adventures together. 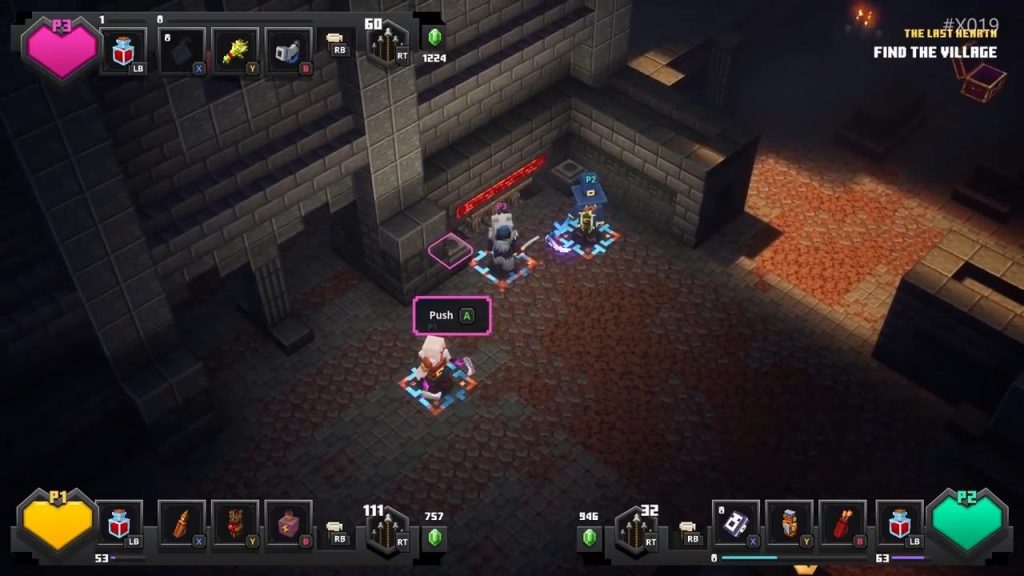 So, what is our verdict for Minecraft Dungeons? Well, it might be a little too early to offer any.
With how little players currently have access to the beta we don’t know if the multiplayer will have balancing issues. With how little we can watch of the gameplay we don’t know if the later levels will be able to keep the players’ interest, after the novelty of the new format wears off. With how little we can experience of the individual areas and dungeons, we don’t quite know if the dungeon crawling environment can offer as much excitement as the limitless world that can manifest wildest creative whims.

Still, even from what we know so far we can already see what makes Minecraft Dungeons an exciting new experience for the passionate fans of its sandbox predecessor.
Dungeons! Detailed environments with puzzles and traps that lock players into mob ambushes, as well as levers and hidden passageways that lead players to stuffed treasure chests.
Developments on the familiar lore! Exciting story with familiar (and new) characters and quests that progress the player towards further exploration and discoveries.
Unique collectible items! A player house blanketed in cozy shadows and warm sunlight falling through the windows that can be decorated with candles, wheelbarrows, shop signs, paintings, books, and even an anatomy statue of a Creeper.

And, of course, the adorable Piggy Banks. In those dire moments when you need just a little bit of a boost, an adorable little piggy carrying a big chest with useful resources will scutter around for you to… well, punch repeatedly. But, hey, it was still very nice of it to show up and get you some extra emeralds and arrows. 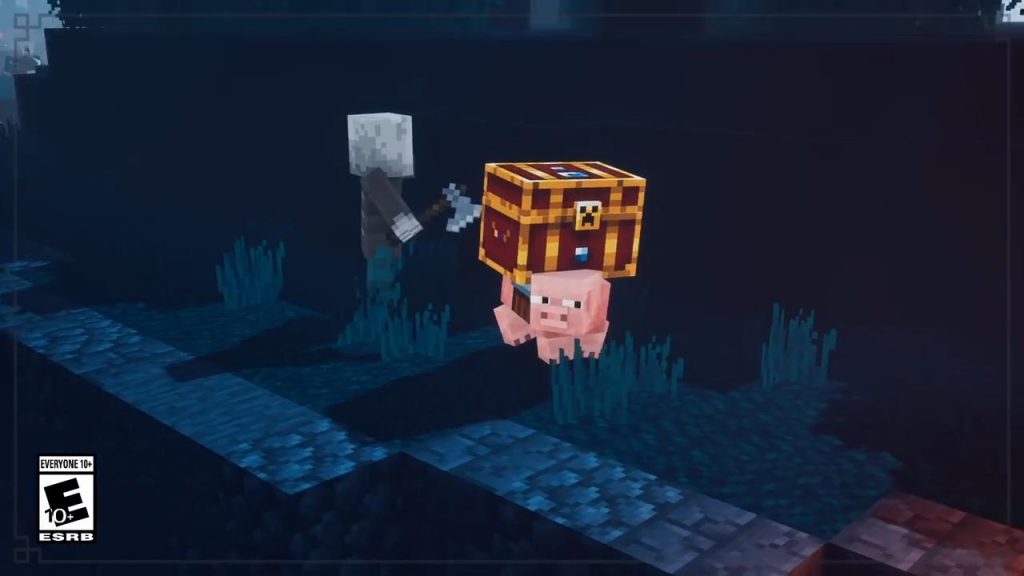 So, does Minecraft Dungeons have anything to offer to the genre of the RPG dungeon crawlers? We can’t be sure just yet.
But, tell me: have you ever imagined Minecraft, but as a Diablo game? And, like, it actually being good?
Well, the developers of Minecraft Dungeons dared to do so, and they put in a lot of effort to make it pretty darn exciting.