The latest expansion for World of Warcraft, Mists of Pandaria is out on the 25th September but as is now quite normal with an expansion they have released some of the content beforehand. We don’t have access to the Pandarans, the Monk class or the pet battles but that makes sense considering that the expansion itself has been pretty much sold on those points.

So what has been released? What has been delivered to us as we wait for Mists of Pandaria? In essence tweaks, though the word tweak severely underestimates the level of changes that have happened.

Firstly, the talent trees. Now for players of World of Warcraft, new and old the talent trees are something that have always been there. They may have shrunk a little or been redesigned slightly, but the basic element of adding points into the various skills as you increase in level to change the way your hunter works has gone. This has been replaced with a system that is much simpler in design. Every 15 levels starting from level 15, you get to choose one of three new skills. Simple as that, every 15 levels you get a new skill. 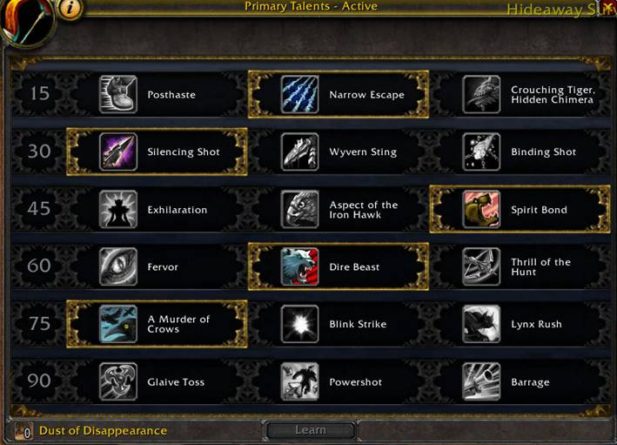 Now, on to the Hunter who has been my main character for a few months before the pre-expansion changes and is still my favourite class. I’ve found that the positive changes to my hunter easily out-weight the negative, so we’ll get them out of the way first. I did notice a decrease in DPS, or at least that what it looked like at first, but after playing with my Hunter for a few dungeons, I now see that the DPS has just been shifted so that the pet is even more powerful, making Beastmaster hunters all about the pet and other animal skills.

Animal skills? What animal skills? Well, there are several new skills to the Beastmaster’s arsenal that have made the hunter even more fun to play. 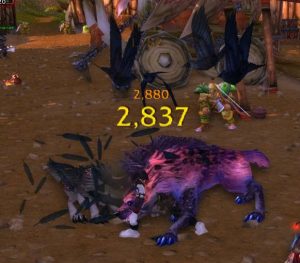 That’s not it. The minimum range for using a ranged weapon has been removed meaning you can fire your bow, crossbow or gun at point-blank range. Although, at this point is worth stating that there is now no ranged/relic etc. slot. You have a primary and secondary slot.

So, yeah overall I am very positive about the changes but I know a lot of other people aren’t. They feel that after spending so long learning how to play their characters the changes Blizzard have made mean that they all have to start and learn how to do it again. I do agree with what they are saying, it’s true it is frustrating to put so much effort into becoming skilled with your character to have it taken away. 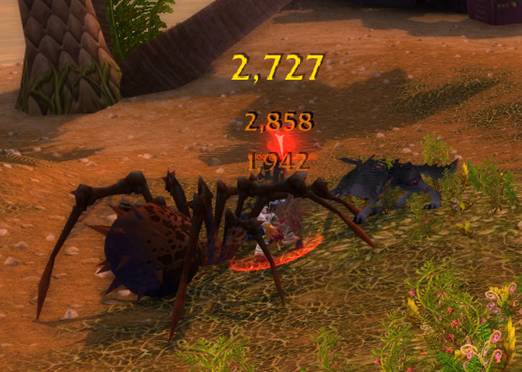 I’m a little more pragmatic for a number of reasons. Firstly, this is now the fourth expansion that I have bought for World of Warcraft. It’s now the standard routine, to have to do things over again. It’s the etch-a-sketch approach, it doesn’t matter what you do because by the time it hits the next expansion they’ll shake it, until you have no idea what you’ve drawn and have to start again.

Though just as the changes and whining are now standard for every expansion so is the general acceptance of the new status quo until a year down the line the cycle starts again.

I’m still looking forward to Mists of Pandaria, the pre-expansion patch has not put me off. I have to admit the thought of levelling from 1 – 90 is not a prospect I’m looking forward to, but as long as I have my Beastmaster Hunter I’ll be alright.

If you still want to read more, head over to Spinksville and have a read of what she thinks about the changes…