When I was younger I remember playing the Games Workshop Blood Bowl board game, and I loved it. The simple approach, bloodthirsty gameplay, and the relatively short amount of time to play a game (about an hour) made it a firm favourite.
Now, around ten years later, I was pleased and a little curious to discover that a PC game of Blood Bowl was in the shops. I took the gamble and shelled out the small amount of cash.
I was not disappointed. The gameplay is exactly the same as I remember the board game.  In the original Blood Bowl computer game, you were able to play as one of seven teams (Orcs, Humans, Chaos, Skaven, Dwarf, Wood Elf, Goblin, Lizardmen), with Dark Elves being made available later via download.

A year later a new version was released called ‘Blood Bowl: Legendary Edition’ which included some gameplay updates as well as a whole host of new teams to play with (Undead, Necromantic, Vampire, High Elf, Ogre, Halfling, Nurgle, Norse, Amazon, Khemri, and Elves) and stadiums to play in. As well as the turn-based mode there is also a real-time play mode, which is a nice new approach to the game-play, if not a little tense.

Graphically, Blood Bowl isn’t superb. Although the graphics are by no means lacking, they’re just not as highly polished as in high-end games. However, the sprites are detailed enough, and each with their own animations. Some of the different animations for the touchdown celebration are amusing and fit in well with the races. The pitches are littered with detail, such as left over skulls, rats, broken helmet’s etc., which add further depth to the playing field. 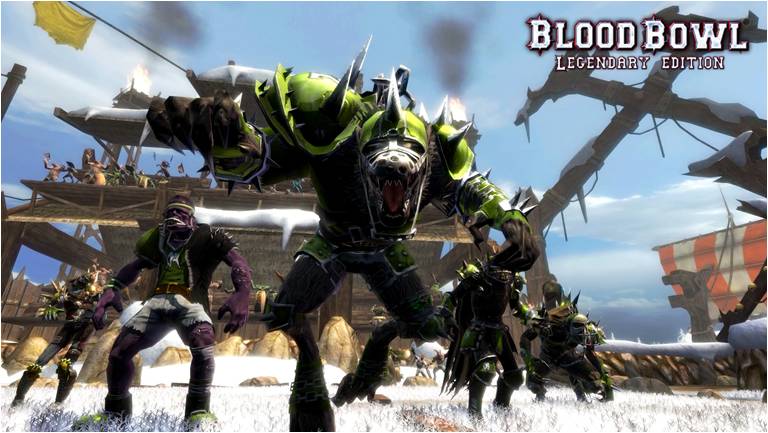 The sound and the music… well, like the graphics they are not going to knock your head off with their intense realism, but they have been creatively designed and they do fit in well with the theme of the game.

One thing of note is the commentary. Through the game you’ll hear two commentators providing punditry for the game, with quirky stories and anecdotes. Of course, there are only a limited number of anecdotes and if you play it long enough, they’ll start to repeat them, but they fall into the background well, so they never become too annoying.

One of the best features of Blood Bowl is the multiplayer option. Once you have entered the code you got free with the game, you gain access to the multiplayer servers. On these servers you can set up your own leagues, inviting who you want, setting up your own rules, rewards, etc.

Or, you can ask for a match from anyone online, or ask the computer to set you up with an opponent of equal team value. It’s also worth noting that any differences in team value are equalised by the addition of extra money (meaning that the lower-valued team has more money for that match, to buy star players, dirty tricks, spells, etc.).

(You can reach the Blood Bowl video game official site here. You can also get the game on Steam.)

If you are a fan of the original board game, then this is certainly worth the money. I found myself constantly going for that 'one last game', and getting to bed way later than I should have. With the extra polishing in Legendary Edition for around the same price, and the addition of 11 extra teams, my advice is to hunt out Legendary Edition and get that instead. I don’t think you’ll be disappointed.