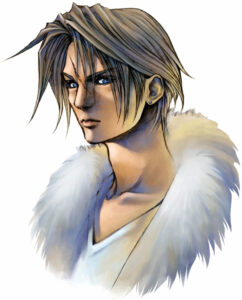 The taciturn and reluctant hero.

character of this story and a cadet of the special combat unit SeeD from the Balamb Garden Military Academy. Judging from his anti-social behavior, he appears to be selfish and lacking a sense of team unity. An aloof character that dislikes having others involved in his affairs, Squall is best described as a lone wolf.