Skip to content
Forums
Gaming
Skyrim
How To Get a Dog as...

How To Get a Dog as a Skyrim Companion 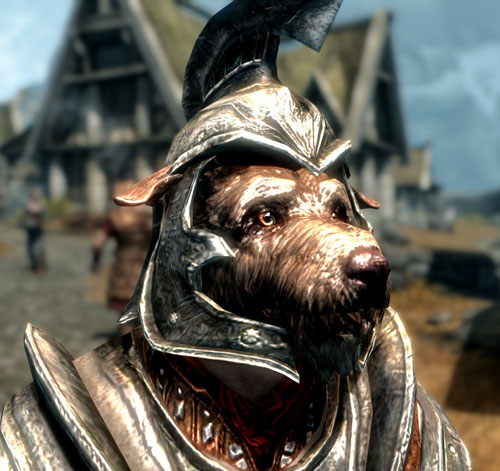 The world of Skyrim is vast, and exploring the northern provence of Tamriel can be a lonely business at times. Sure, you can fork over 500 gold and retain the services of several good hirelings (see our earlier article Help Wanted: Finding the Best Hirelings in Skyrim ), but why not forego a two-legged follower and get yourself a dog? Or better yet, get a hireling and a dog (yep, with a dog you can have two companions at the same time). Just like in the real world, a dog can truly be your very best friend.

Really, I Can Have a Dog?

He followed me home from the Dwemer ruins. Can we keep him?[/caption]

In last week's Skyrim Fansite poll, we asked readers if they ever had a dog as a Skyrim companion. Surprisingly, 42% of poll takers didn't even know that you could have a dog in the game. Part of the confusion might stem from the fact that there are several dogs in Skyrim that cannot become followers (take the dog in Riverwood for example -- he'll bark for you pretty as you please, but there's not a chance in Oblivion that he'll follow you anywhere). In fact dogs are the only animals that can become followers, and there are only a few such faithful hounds in all of Skyrim.

Where to Find a Dog

If you're looking for a dog as a Skyrim companion, you have your choice of a few four-legged friends. These loyal dogs will fight by your side and obey your commands, but they cannot carry your burdens.

Vigilance is a war dog for sale at the stables in Markarth. Actually, he's the only dog you have to pay for and costs 500 gold (the same as any other hireling). Speak with Banning (he's usually found outside the Markarth Stables tending the horses). He'll sing the praises of Vigilance and dogs in general, offering to sell him to you for the right price.

Meeko is a dog you find roaming near Meeko's Shack in the wilderness in Hjaalmarch. Meeko's Shack is a small building found east of Dragon Bridge and south of Solitude Sawmill. As it turns out, poor Meeko lost his Nord master (died of Rockjoint -- his corpse is lying in bed inside the Shack). Once you find Meeko he'll lead you to his master's body, and you'll be given the option to make the dog a follower.

By chance, you may come across a Stray Dog in your Skyrim journeys. Stray Dogs are random world encounters that typically involve a dog fighting off a pair of wolves. If you kill the wolves (or other enemies) and the dog survives, you can befriend the hound and he'll become your best buddy.

Barbas belongs to Clavicus Vile, a Daedric Prince. Barbas will accompany you on the quest named A Daedra's Best Friend. The quest begins in Falkreath after encountering a guard who asks if you've seen a stray dog running loose outside of town. Without revealing too many spoilers, you basically have to start the quest but **cough, cough** never finish it. Barbas will continue to follow you and he'll be marked as an "essential character" and won't die. Having a companion that can't be killed can be advantageous, but as an "essential character," Barbas technically isn't a follower and he'll trigger the detection eye when sneaking (if you play as a Thief this makes stealing a nightmare).

Advantages of Having a Dog

Having a dog as a Skyrim companion definitely adds interest to the game. As mentioned earlier, dogs are loyal and will fight by your side. In addition to fighting, you can command a dog to stay in one place ("Wait here") or dismiss him as your follower ("Go away dog. I don't need you"). Be careful though -- if you want to keep your dog, but make him stay in one place for three game days, he'll leave your service and you'll receive the message "Your dog has returned home." If you're looking for a pet though as opposed to a traveling companion, you can make your dog wait in a house that you own. After three game days he'll no longer be able to follow you, and he'll stay in your house indefinitely, giving you a friendly face to come home to after a hard day of dungeon diving and treasure seeking.

Disadvantages of Having a Dog

With the addition of a dog, you can travel the wilds and dungeons of Skyrim with man's best friend, but there can be disadvantages. Sure, you don't have to give your pooch a flea bath or buy him a a dog license in Solitude, but fighting alongside a dog can present problems. Not only do dogs tend to rush headlong into battle at the first site of an enemy (Skyrim dogs don't understand the meaning of stealth), they tend to get in your way more than other followers -- bumping into you, setting off traps, and becoming overall nuisances in the heat of battle. Also, they aren't as resilient as other Skyrim followers. With the exception of Barbas, they can't soak up a lot of damage and can be killed off somewhat easily.

So how about it? Have you ever had a dog as a Skyrim companion? Let us know your thoughts on Skyrim dogs and share your experiences. Also, be sure to check out our Skyrim wallpaper section for awesome HD wallpaper for your PC and electronic devices. Until next time. Keep your eyes to the sky, fellow travelers!

Didnt know that. But i guess it wouldnt really suit for a Khajit to have a dog as a follower (for obvious reasons). :/

LOL! I haven't played the Khajiit yet, but when I do I'm definitely getting a dog.

Did anyone say you couldn't have a dog follower as a Khajiit? No.

I always end up thinking my dog is a wolf and killing him on accident?

This post was modified 4 months ago by Furious
Reply

I'ma have Barbados fight Alduin and Mirrak with me if I can.