Change Your Appearance In Skyrim 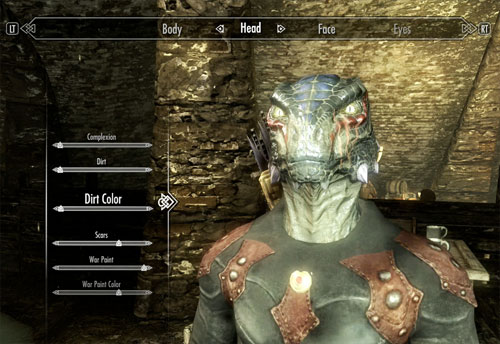 One of the great things about Skyrim is the game's character creation system. As far as RPGs go, Skyrim's system truly is robust. When I played the game for the first time, I spent hours fine tuning my character's appearance. Right from the start, I  was given full control over my character's physical traits via a slew of menu choices.  Looking back, it was lots of fun playing around with the character creation controls and adjusting everything from nose type, eye shape, skin tone and more.

In the end, I really liked how my character turned out. He had a chiseled build and a wicked looking scar across his face that made him look fierce.  After investing hundreds of hours into the game though, I have to admit that I was starting to get a little bored with my character's appearance. What had been cosmetically fresh and exciting was now tiresome. If only there was some way to change things up...

Change Your Appearance In Skyrim

With the Dawnguard expansion you can change your character's appearance.[/caption]

How To Change Your Appearance

It costs 1,000 gold, but you can change your appearance in Skyrim.[/caption]

To change your appearance in Skyrim, you need to visit the Ragged Flagon in Riften and see a woman named Galathil. The Ragged Flagon is the Thieves Guild's tavern, and is located in the city's subterranean sewer system. Galathil wears a hooded robe and can be found sitting on a bench in the tavern. When you speak with her the first time, she lets it be known that she "can work with your face."

If you want to change your appearance, it'll cost you 1,000 gold. The price isn't cheap, but if you're tired of how your character looks it's money well spent. Once you pay Galathil, she'll conduct "surgery" on you. In actuality the character creation menu opens and you can customize your character's appearance to your heart's content.

So how about it? Have you ever wanted to change your appearance in Skyrim, and would you be willing to spend 1,000 gold to do so? Share you thoughts in the Speak Your Mind section below. Also, be sure to read about the upcoming Elder Scrolls Online character creation system. At first blush, the system seems very much like Skyrim's, but with some enhancements. Until next time!

It is definitely worth 1000 gold to change your appearance. Thanks for the info. I never knew this! I am blown away by how good it is.

Thanks for the comment! I was pleasantly surprised to learn that you could change your appearance. Changing appearance was a staple in the Fallout games, and it was a nice addon to Skyrim. True, you don't get to see your character's face all that much, but change is good from time to time.

PC version it's free lol. Just use the console code showracemenu and you are done. Must suck for console players and I know how you feel cuz I have the console version as well as the PC one.

I have ps4 version TwT

This post was modified 6 months ago by Furious
Reply

why change your appearance tho? whats the point? I thought with changing my appearance the guards wouldn't recognize me when I'm wanted??