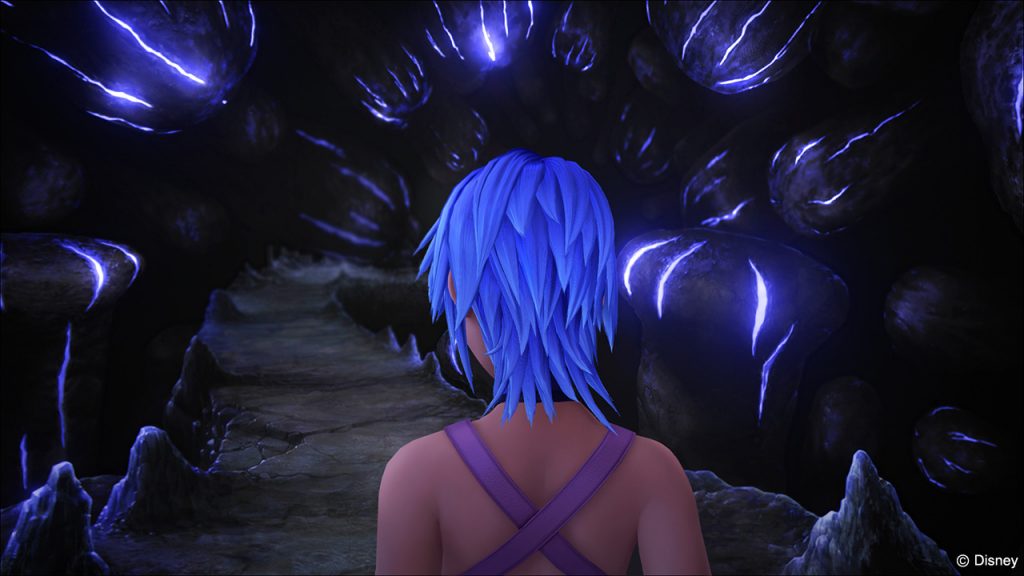 Aqua wanders the Dark World, searching for some sort of exit. She soon realizes the Dark World has swallowed up worlds she had previously visited. Throughout her adventure, Aqua must confront not only the Darkness without but the Darkness within. Has Darkness overtaken the Light? Will Darkness prevail? What of Ventus and Terra? Will Aqua find her way back into the Light? The story ends with a familiar scene between Aqua and a hooded man on the Dark World’s shoreline.

Where on the convoluted Kingdom Hearts timeline does this game fit? 0.2 takes place after Birth By Sleep and before Kingdom Hearts. While the series’ storyline is often difficult to contextualize without further contextualization, 0.2 is a clever insert. For starters, it is similar in-depth to previous Kingdom Hearts games, so there is plenty to probe and ponder.  Furthermore, it's hope-inducing. During Aqua’s final scene, one feels a deep sense of anticipation for Sora, of hope for Light’s victory. In this respect, 0.2’s storyline primes the player for the long-awaited, yet still forthcoming, Kingdom Hearts 3. I cannot say more than this for fear of spoilers.

Some notable, complementary features in 0.2 Birth By Sleep include a magic-environment relationship and open worlds. When Aqua casts a spell—say, Blizzaga—, the spell leaves a trail of ice on which Aqua can slide. When the spell collides with a solid surface, it bursts, leaving behind a misty cluster of ice. Enemies, too, experience spell-based effects. Thundaga has a chance of paralyzing enemies, Blizzaga freezing them, and so on. This magic-environment relationship brings an element of mystical realism to the game that is both satisfying and invigorating.

Moreover, the worlds are open. Each world feels large and whole rather than small and segmented. The player has plenty of room to explore and cherish the rich visuals, grind along an icy stretch, creatively evade or assault Heartless, and more. The openness frees the player to experience everything 0.2 Birth By Sleep has to offer.

Compared to previous Kingdom Hearts installations, 0.2 Birth By Sleep outshines its predecessors graphically. But one need not compare it to previous games to appreciate its beauty. For each animation is slick and careful; few things seem out of sync or discordant with other visuals. The player would do well to divert from the main storyline, skirt up to a high place, and soak in the aesthetics. Just two minutes in each world to admire the background and foreground is enough. Rest in their light and color; soak them in; Ven and Terra can wait.

I wonder how a song about the complexities in navigating a romantic relationship came to be the theme song for the Kingdom Hearts franchise. Nonetheless, Utada’s “Simple and Clean” remix fits the opening cinematic’s paradisal aesthetic. The music itself communicates a message of Light and Dark in conflict. This message accentuates Aqua’s journey through the Dark World, struggling, straining, groping, hoping for the Light. So, even if the lyrics are irrelevant to the game’s storyline, it is a song wisely chosen simply for its sonic properties.

Two things add to Kingdom Hearts 0.2 Birth By Sleep’s replayability. First, it introduces character customization. Upon completing certain quests or objectives, the player earns new outfit pieces for Aqua. None of the pieces alter Aqua’s statuses, and fashion isn’t exactly what makes Kingdom Hearts such a beautiful series. However, when the player finishes the game, there is still more game to play. There are over fifty objectives to complete, only a handful of which the player completes in tandem with the story.

Second, the game is short. Clocking in around six hours total of gameplay, 0.2 Birth By Sleep proves a convenient game to revisit even after completion. For some, this is a turnoff, but the game’s brevity fits with the game’s aim. It is a fragmentary passage. As such, it’s fitting that 0.2 would be so short.

"0.2" is not the first plot-advancing game in almost 10 years. "DDD," and important installment and precursor to "3," was released in 2012. "Union ?[Cross]," while taking place in the distant past, is also an important plot-advancer.

Ah! Dandelion! You're so right. Thank you for pointing that out. Amending the post accordingly.