New quests, companions, and trials await in the upcoming Elder Scrolls Online Chapters, which were just announced on the official Bethesda website. The announcement included a cinematic trailer that shows off the new setting, as well as this year's Big Bad, Mehrunes Dagon. The 2021 adventure is titled The Gates of Oblivion, and will ultimately include four releases throughout the year. The planned releases for Gates of Oblivion are:

The first release, Flames of Ambition, begins the Gates of Oblivion storyline. This release comes with two new PvE challenges: The Cauldron, and Black Drake Villa. The first dungeon involves assaulting a shrine to the Prince of Destruction, while the other is a race to grab a mysterious tome before it is destroyed. The dungeons both offer an opportunities for unique rewards, and long-time ESO players should be excited to learn that Eveli Sharp-Arrow and Dremora Lyranth both make appearances in Flames of Ambition. 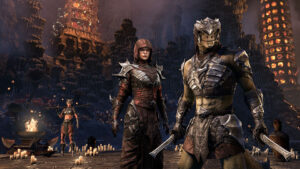 The major chapter update for 2021 is the Blackwood release, which will not only continue the Gates of Oblivion storyline, but will also add a new zone (the eponymous Blackwood), a new Companions system, a new 12-player Trial, Oblivion Portals as world events, as well as new delves, public dungeons, world bosses, and stand-alone quests. The Blackwood release will also come with updates and quality-of-life improvements for ESO.

Lizard-lovers rejoice: the Blackwood region sits between the Argonian homeland and the Imperial Cyrodiil, so there will be lots of the long-tailed scaly-folk to meet (and possibly fight), in addition to the Imperials that will surely be around. The already complex sociopolitical situation no doubt becomes even more complex when Oblivion portals start opening up. 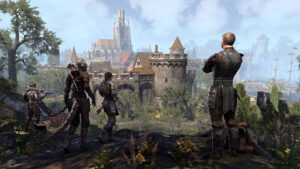 The Blackwood region features the Imperial City of Leyawiin -- which made an apperance in the Elder Scrolls IV: Oblivion -- and also includes the Niben Forest and the Blackwood Bog. The main storyline in Blackwood involves a Daedric prince and a conspiracy that threatens all of Blackwood, and can be enjoyed on its own or as part of the larger Gates of Oblivion storyline.

As usual, there are bonuses for pre-orders. The Blackwood pre-order rewards are:

Is the Nightmare Bear Cub cute?[/caption]

After Flames of Ambition and Blackwood will come another DLC dungeon pack, and then another DLC story zone, sometime in Q3 and Q4 respectively. There are no details as of yet on these releases, but we do know that they will continue the Gates of Oblivion story line that begins in March with the release of the Flames of Ambition DLC.

There are 4 different versions of Blackwood Chapter: the "Upgrade" contains only the newest chapter, while the "Collection: Blackwood" also includes every previous ESO chapter. There are also Collector's Editions of both the Upgrade and Collection options, with the Collector's Edition versions featuring the following additional rewards:

If you decide to purchase the Collection, you'll also get access to the base game right away, which makes it a tempting option for new players who've decided they want to all-in on Elder Scrolls Online. There's a page on the Bethesda website to help you decide as well.

Are you excited to once more step through the fiery gates of Oblivion? Let us know in the comments!

You made me check if I understood that correctly, and yes -- TESO will indeed be adding a new Companions system! How interesting. Wonder what ZeniMax will be doing with that... will they be pretty much pets, but battle pets for special occasions? Or, even less, just a take on NPCs that follow you during quests? Just tagging along and adding to damage somewhat? Or will they make them into somewhat of a party member that can take on a role, say, of a healer?

That's pretty exciting. These updates and others make me consider maybe taking up TESO again.